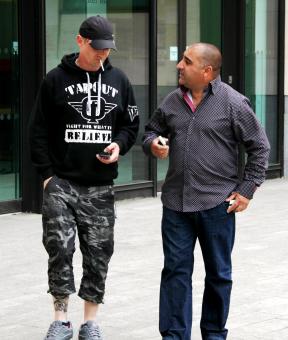 Two racist thugs who beat up an innocent man and told him “go back to your own country” have narrowly avoided jail.

Salvatore Allegro, 48, of Home Gardens, Dartford, and James Whitbread, 36, from Rochester, carried out the unprovoked attack at Bank Underground station on August 18 last year. The pair were both found guilty of a racially aggravated public order offence following a short trial, with Allegro also being found guilty of common assault.

A statement read out by prosecutor Malachy Pakenham from Mr Farhan said: “I carried on walking, Allegro was to my right. I could smell alcohol come from him. Allegro turned to me and I was aware he was in the company of someone else, who continued to stand to his left and was Whitbread.” As Mr Farhan headed towards the lift area, the two men “squared up to him” and started swearing.

The statement continued: “Whitbread punched me to my upper body with the palm of his hand. I held my hands up to try and keep him away. London Underground staff came over to where we were standing to get the men to stop coming towards me but this didn’t work. The next thing I remember was the rest of the group standing over me. I received a number of punches very quickly to my face and head.”

Mr Farhan said the next thing he remembers was being on the ground after falling and hitting his head. He said Whitbread punched him first with a clenched fist and that shortly afterwards Allegro also punched him. The statement continued: “I realised my nose was bleeding as I was lying on the floor. The whole incident lasted five minutes.”

In the days following the attack, Mr Farhan realised he recognised Allegro from a stall at Lewisham market. The following Monday he went to the market and he instead identified Whitbread working on a fruit and vegetable stall.

After the attack, Mr Farhan said he was experiencing difficulty breathing and pains to his neck. He said it “upset him mentally” and he has “not wished to use public transport since.”

Defending Allegro, Sara Ashkboos said the incident occurred shortly after his mother had died and not long after he had been divorced. She said: “As a result of the vulnerability and isolation, he began hanging around with the wrong crowd. He is sorry for this incident and feels quite ashamed and embarrassed.” Bridget Irving, defending Whitbread, said a prison sentence would “impact on his wife and young children.” She added: “Considering his mental health problems, he is likely to be quite vulnerable in prison.”

District judge Lloyd handed both men a six month prison sentence, suspended for 18 months. They were also both banned from engaging in any EDL activities, meetings or protests for 18 months. Allegro was made to carry out 120 hours unpaid work while Whitbread was given an 18 month supervision requirement. The duo must each pay Mr Farhan £100 compensation as well as prosecution costs of £150.

BTP investigating officer Detective Sergeant Gabriel Oresajo said: “Salvatore Allegro and James Whitbread’s behaviour was despicable and is not tolerated on the Tube network. This type of abuse and harassment is fortunately rare on the London Underground, but when it does happen, BTP takes it very seriously and will do everything we can to bring offenders to justice. Anyone who is a victim of hate crime should report it immediately to police so we can work to trace and arrest the offender as soon as possible.”

Could James Whitbread possibly be related to the fascist who tweets as “Jay white”? As well as prominently featuring photographs of EDL protests, his Twitter account also contains links to material like this. Last year we came across a Jay White who posted a link to a YouTube video of “Kick the Reds In” by the neo-Nazi band Whitelaw on the EDL Essex Division’s Facebook page.

As for Salvatore Allegro, according to his Facebook page he holds the powerful position of “Second in Command at English Defence League Dartford Division (Kent EDL)”. Presumably, in light of his sentence, he will be resigning from that post with immediate effect.