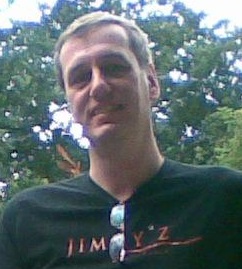 A UKIP candidate in Brent has been drawn into a race row after he lambasted Muslims in a ranting email to planning chiefs.

Heino Vockrodt, who is standing for the Dudden Hill seat on May 22, accused Muslims of grooming sex slaves, compared a Willesden road to war torn Helmand Province and claimed Islam was an ideology not a religion. The 52-year-old financial and commercial consultant also claimed Islam was against ‘everything modern Britain stands for’ during his correspondence.

In the email, seen by the Times, Mr Vockrodt also labelled town hall bosses as “Yes-Sayers, Appeasement Chamberlains and look-The-Other-Way cowards” for allegedly turning a blind eye on developments of an Afghan centre in Willesden in fear of being called racists. According to Mr Vockrodt the centre had ignored planning rules to carry out developments on its building despite being turned down twice by the council.

He said: “…just like in all the other cases where Muslims are grooming to sex slaves under the eyes of the authorities, the council does NOTHING for political correctness (not that there is any).” He continued: “All the old owners of the neighbouring shops have been squeezes out by Muslims. The entire parade –once lovely owner/occupier shops –resembles Helmand province now. Time to call MI5 & MI6 for sure.”

He added: “Islam is a mono-cultural, totalitarian ideology. It is NOT a religion. It is against multi-culturalism and only promotes its own culture. It is against everything modern Britain stands for.”

Cllr Muhammed Butt, leader of Brent Council, has lambasted his comments claiming they are deeply offensive to residents. He added: “Nigel Farage keeps claiming UKIP isn’t a racist party, but that’s a hard pill to swallow when its members have put forward an individual with such plainly bigoted views for election to public office. In Brent we draw strength from our diversity and the vibrancy it brings, and our community deserves better.”

When the Times tried to contact Mr Vockrodt he refused to comment and put the phone down.

This is not the first time that Heino Vockrodt’s views have received media coverage. Earlier this month the Evening Standard reported that he had described members of the far-right English Defence League as “honest normal people”.

Still, Vockrodt is not without his supporters. He has the backing of UKIP-admiring Raheem Kassam’s Breitbart London, which describes Vockrodt’s comments as basically “jokey” and “tongue-in-cheek” (while conceding that “some elements of the e-mail could be considered insensitive”) and indignantly accuses the Guardian‘s Hugh Muir of “bully tactics” because he contacted the UKIP candidate to ask for an explanation of his vile email.

Breitbart also quotes Vockrodt as saying: “I mentioned that ‘Islam is not a religion’ in my e-mail. I was hasty and my English is not my first language. I meant ‘Islamism’. I wrongly conflated two issues, the mosque, and other incidents wherein political correctness is used as a shield not to investigate issues pertaining to Islamism.”

Breitbart goes on to quote a further comment by Vockrodt about the management of the Willesden Afghan centre: “First, they were refused change of use to D1 in 2010… Then, they were refused a single storey extension (classed as A3) … but … being Muslims, they ignored both refusals and did it anyway….”

So, not a hint of anti-Muslim bigotry there, then.

It’s unlikely that Vockrodt’s email comments will raise any eyebrows in his local party, though. After all, the chairman of UKIP’s Brent & Camden branch is Magnus Nielsen, who claims that “Islam is organised crime under religious camouflage” and, like Vockrodt, takes a positive view of the EDL.

And in any case, we have Vockrodt’s assurance that “UKIP is not a racist party”. 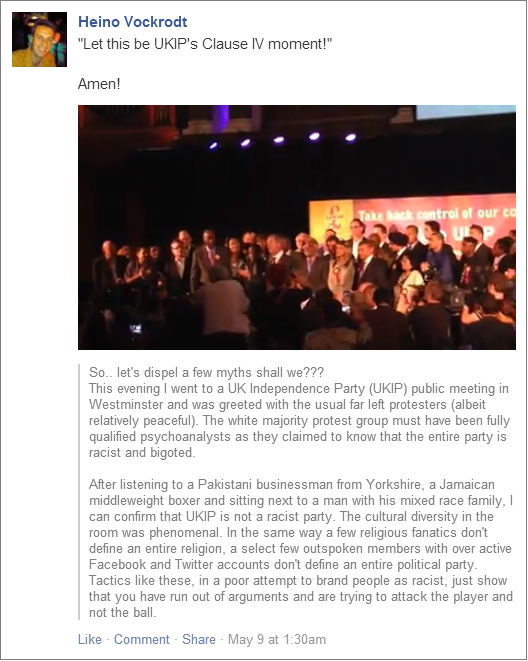