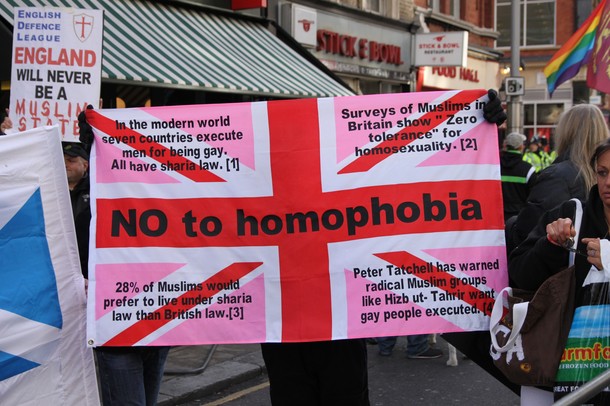 What a popular man Peter Tatchell is. His article on the Mohammed Hasnath case, titled “Gay Free Zone conviction is disturbing”, which originally appeared on the New Statesman blog, has been crossposted at both Pink News and Harry’s Place, not to mention on a website rejoicing in the name of 9-11 Do more than Never Forget – Stop ISLAM. It has also been reproduced by the English Defence League’s Casuals United faction, who have provided their own approving headline, “Peter Tatchell piles into the Islamists”.

As you can see from the illustration above, the far-right racists of the EDL are big fans of Tatchell. And the reason why they are particularly enthusiastic about his latest article is because it repeats the familiar Islamophobic slanders about Tower Hamlets that have provided the EDL with an excuse to hold an intimidatory anti-Muslim demonstration there at the end of August.

According to Tatchell, there has been a “wave of horrific queer-bashing attacks in the East End” and a large share of the blame for this lies with the East London Mosque, which has “hosted a series of virulently homophobic speakers” and “helped create the atmosphere of hatred that has poisoned the minds of many Muslim youths, probably including Hasnath who worshipped there”. Moreover, Tatchell claims that the East London Mosque’s management “have never apologised for hosting homophobic hate preachers and have never given any assurances that they will not host them again in the future”.

We have already demolished most of this nonsense here. As for Tatchell’s allegation that the mosque has refused to ban homophobic preaching, perhaps he should re-read his own press release from three months ago in which he welcomed “the East London Mosque’s assurance that it will not give a platform to anti-gay speakers in the future”. (Does he really not remember this? Is his memory that short?) What I want to address in more detail, however, is Tatchell’s treatment of the laws relating to homophobic hate crime – for, as one critic observed in the comments section at the New Statesman, “rarely have I read such an inconsistent and legally incoherent rant”.

Tatchell repeats the assertion – first made by Adrian Tippetts in an article on the National Secular Society website, subsequently taken up by the English Defence League and then repeated in the expanded version of Tippetts’ piece that appeared on the Homintern site – that an individual convicted of posting up stickers attacking any minority other than the LGBT community would have received a much a heavier sentence than Mohammed Hasnath did.

As Tatchell puts it: “He was fined a mere £100. If the stickers had declared East London a Jewish, black, Catholic or Muslim free zone Hasnath would have been almost certainly convicted of a racially or religiously aggravated hate crime and jailed. Why the leniency? Why the double standards? It looks like judicial homophobia.” In particular Tatchell criticises the decision by the Crown Prosecution Service to charge Hasnath under Section 5 of the Public Order Act, which criminalises the causing of “harassment, alarm or distress”, arguing that “there is other, more credible, legislation that could have been used to bring him to justice”. What legislation that might be Tatchell doesn’t say.

The actual legal position on hate crime and minorities, and its consequences for the prosecution of Mohammed Hasnath, has been outlined here. To summarise, the CPS almost certainly took the decision to charge Hasnath under Section 5 because they feared that a prosecution under any other law would fail. Section 4A of the Public Order Act, which criminalises “intentional harassment, alarm or distress”, does carry a possible prison sentence but would have required proof of intent, which is notoriously difficult to establish. And a charge of incitement to hatred on the grounds of sexual orientation under Section 29 would also have failed because the “gay free zone” stickers featured no actual threats. The source of the problem lay in the absence of adequate legislation to protect the LGBT community, not in “judicial homophobia”.

The decision to charge Hasnath under Section 5 was in any case hardly unprecedented, as Tatchell knows perfectly well. Ten years ago an evangelical Christian named Harry Hammond was arrested for displaying a sign that urged the citizens of Bournemouth to “Stop Immorality, Stop Homosexuality, Stop Lesbianism”. The law against inciting homophobic hatred was not on the statute books at that time, but the CPS could have charged Hammond under Section 4A. However, presumably because of the same difficulty in proving intent as arose in Hasnath’s case, the CPS decided on a prosecution under Section 5 instead, and Hammond was subsequently convicted and fined under the same part of the Public Order Act as Hasnath.

Did Tatchell denounce the light sentence that Hammond received and criticise the CPS for not charging him with a more serious offence that carried a prison sentence? Did he argue that it was an example of “judicial homophobia”? Not at all. Instead, Tatchell complained that it was wrong to have prosecuted this homophobic bigot in the first place, claiming that the law had been misused in order to “curtail free speech and peaceful protest”. In a letter to the Spectator, Tatchell wrote:

“The conviction of Harry Hammond for displaying a placard criticising homosexuality is a grotesque misuse of the Public Order Act. His placard was offensive to gay people; that is not, however, a legitimate reason to suppress his right to protest and turn him into a criminal. Freedom of speech is so precious that it must be defended, even when we disagree with the sentiments expressed. Other than direct incitements to violence, there is no justification for criminalising words and opinions. If Mr Hammond appeals, I would gladly testify in favour of his conviction being overturned.”

In contrast to Hammond, Hasnath pleaded guilty to the offence – which incidentally is why he had to pay a lower fine and costs – but if he had pleaded not guilty and the case had gone to appeal would Tatchell have offered to appear as a witness for Hasnath too?

And we’re still no nearer to understanding which offence Tatchell thinks Hasnath should have been charged with. Rainbow Hamlets LGBT community forum wanted a prosecution under Section 4A, but Tatchell is adamantly opposed to any prohibition of behaviour that causes “harassment, alarm or distress”, so 4A would be as repugnant to his libertarian conscience as Section 5. Would Tatchell argue in favour of a charge under Section 29, then, which criminalises the incitement of homophobic hatred?

Well, no, he wouldn’t. Even if it had been possible to secure a conviction of Hasnath under Section 29, Tatchell would be against that too. When the homophobic hatred law was passed by parliament Tatchell came out against it. He wrote: “All incitements to hatred should be treated with the same zero tolerance. But not, in my opinion, by means of criminal sanctions. Free speech is precious. It should be limited only in exceptional circumstances – when it slips into inciting violence and murder.”

So it turns out that, far from advocating a more severe penalty for Hasnath, Tatchell’s actual position is that he shouldn’t have been charged with any criminal offence at all. As long as homophobes stop short of explicit calls for violence they are merely exercising their right to free speech, according to Tatchell, and should be allowed to harass, abuse and incite hatred against the LGBT community without any legal restriction whatsoever.

Most reasonable people, however, would agree that the LGBT community have the right to go about their lives without suffering such treatment at the hands of bigots and should be entitled to legal protection against it. Tatchell also ignores the reality that the public expression of homophobic hatred – just like racist and Islamophobic hatred – creates the conditions in which the victims of that hatred are more likely to come under actual physical attack. This is why, even though Mohammed Hasnath’s “gay free zone” stickers did not contain any threats of violence, in victim impact statements presented to the court LGBT people stated that they did feel threatened by the stickers.

The main lesson of the Mohammed Hasnath case is that the law needs changing so that incitement to hatred on the grounds of sexual orientation or religious belief is subject to the same effective legal sanction as incitement to racial hatred. Here the Muslim and LGBT communities have a common interest in pressing for reform. However, they can be sure they won’t get any assistance from Peter Tatchell. He will no doubt obstinately continue on his present course of assisting the far right to stoke up Islamophobia while at the same time rejecting the LGBT community’s right to legal protection against homophobia.