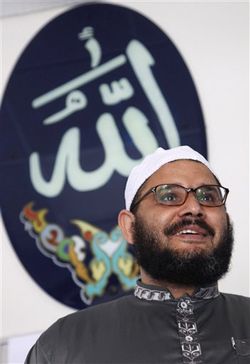 The New York Police Department’s intelligence squad secretly assigned an undercover officer to monitor a prominent Muslim leader even as he decried terrorism, cooperated with the police, dined with Mayor Michael Bloomberg and was the subject of a Pulitzer Prize-winning series by The New York Times about Muslims in America.

Sheikh Reda Shata was among those singled out for surveillance because of his “threat potential” and what the NYPD considered links to organizations associated with terrorism, despite having never been charged with any crime, according to secret police documents obtained by The Associated Press.

This was life in America for Shata: a government partner in the fight against terrorism and a suspect at the same time.

During his time at the Islamic Center of Bay Ridge since 2002, he welcomed FBI agents to his mosque to speak to Muslims, invited NYPD officers for breakfast and threw parties for officers who were leaving the precinct. As police secretly watched Shata in 2006, he had breakfast and dinner with Bloomberg at Gracie Mansion and was invited to meet with Police Commissioner Raymond Kelly, Shata recalls.

“This is very sad,” Shata said after seeing his name in the NYPD file. “What is your feeling if you see this about people you trusted?”