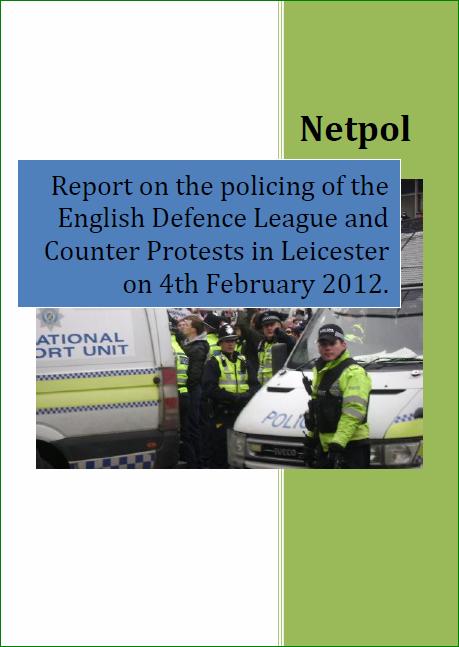 Netpol has published a critical report into the policing of the EDL and Counter demonstrations of February 4th in Leicester. The report is a collation of the evidence and observations obtained by a team of community-based legal observers who spent the day monitoring the policing of both EDL and counter-demonstrations. The legal observers deployed were local volunteers trained by Netpol with support from The Race Equality Centre (TREC) and Highfields Centre.

The report criticises police handling of the demonstration, particularly the effort and resources the police and local authorities devoted to persuading the local community, particularly young people in the local community, not to attend counter demonstrations against the EDL. It also raises questions about the use of force, particularly the use of dog units against Muslim youth, and the restrictions on movement placed on the Muslim population, effectively making Leicester a ‘no-go’ area.

Val Swain of Netpol stated, “The decision by Leicestershire constabulary to persuade local communities, voluntary and faith groups and particularly young people to stay away from counter demonstrations was utterly wrong. It really cannot be the role of the police to decide who is able to demonstrate and who is not. As well as being an interference with fundamental rights to protest, it led to a policing strategy that prioritised police control of the local community, especially Muslim youth. This raised tensions, heightened anger, and in my view made conflict more, rather than less likely.”