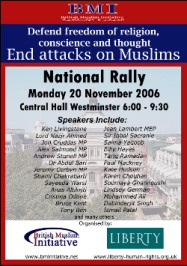 Islamophobia on the March

On November 20, at Methodist Central Hall Westminster, a national rally will be held to defend freedom of thought, conscience and religion.

Organised jointly by the British Muslim Initiative and Liberty, it has the support of a wide range of organisations, including faith groups, anti-racist campaigns and labour movement bodies.

The rally will be the first step in initiating a national campaign to defend freedom of religion and culture and to combat the rise of Islamophobia.

The aim is to support the principle that communities from different ethnic and cultural backgrounds, of all religions and none, should live together in a spirit of tolerance and respect for each other’s customs and values.

London itself is in many respects a model for the sort of multicultural society we want to build. The diversity brought about by successive waves of migration has been a key factor in the success and dynamism of the capital.

The Jewish community, for example, which has contributed so much to London economically and culturally, was greatly enlarged in the late nineteenth and early twentieth centuries by the influx of refugees fleeing anti-semitism in Tsarist Russia.

If they had been told it was a precondition for British citizenship that they had to abandon their religious practices and forms of dress, and adopt the culture of the majority community, we would have been immeasurably diminished as a society.

Most Londoners recognise that multiculturalism is good for the capital, according to a recent MORI poll commissioned by the Greater London Authority. It showed that 70% of residents felt London was a better place to live because of its “mix of cultures, languages and ethnicities.”

Thirty-seven per cent said the diversity of the capital was “a very good thing” and 33% “quite a good thing.” Only 7% said it was “quite a bad thing” and 6% a “very bad thing.”

Londoners support a basic principle: we all have the right to be ourselves and retain our own beliefs and cultural practices as long as we don’t interfere with the rights of others. This tolerance and respect for personal choice is what unites us.

Yet that principle is under attack from sections of the media and some politicians. It is claimed that community relations in Britain are deteriorating and that there is an increasing polarisation in society which threatens our security.

It is suggested that multiculturalism is responsible for this state of affairs, with particular blame directed at the Muslim community.

By asking loaded questions, opinion pollsters have produced “evidence” that there is widespread sympathy among British Muslims for terrorism. The result has been to depict Muslim communities as a sort of fifth column within British society.

These misrepresentations have been exposed by the 1990 Trust’s recently published survey of Muslim views, which reveals that only a tiny fraction of British Muslims – less than 2% – have any sympathies at all with the 7/7 bombings.

The overwhelming majority of Muslims are opposed to the terrorist grouplets responsible for such attacks and are committed to working with the authorities to prevent a repetition of these atrocities.

The media frenzy unleashed by Jack Straw’s comments about the Islamic veil has continued and intensified the demonisation of British Muslims. The Daily Express featured a succession of front-page “Ban the Veil!” headlines, claiming 98% support from its readers for that policy.

I have made clear my disagreements with Jack Straw’s position. During the 14 years I was MP for Brent East there were a few occasions when a fully veiled Muslim woman visited my advice surgery. I would never have considered asking her to remove it.

Bear in mind that this person has come to you to resolve a problem for them, and feels dependent on your good will.

The power imbalance in that relationship means it is completely unacceptable behaviour on the part of an MP to make such a request and I was amazed by Jack Straw’s insensitivity.

I believe that the already tiny number of Muslim women wearing the full veil will further reduce in time. But that will be something that comes from within the Muslim community itself, and people who are outside the community lecturing Muslims on how they should dress is entirely counterproductive.

Whatever a person’s view on the most suitable forms of clothing, they have no right to impose this on others – it is a fundamental human right that every person should be allowed to dress in accordance with their religious views, as dictated only by their individual conscience.

This right had to be defended in the past for Sikhs and other communities and it must be defended today for Muslims or indeed any community that faces such a challenge. It applies equally to those who wish to wear crucifixes.

Jack Straw’s description of the niqab as a “visible statement of separation and difference” has been taken up by the right-wing media to suggest that segregation and exclusion are the fault of Muslim communities themselves. It is a classic case of blaming the victim.

The real problem is not Muslims wanting to be separate, but rather the unprecedented levels of discrimination preventing them from getting on in society.

Last month I launched a new report, “Muslims in London,” aimed at dismantling barriers of discrimination faced by Muslim communities.

It showed that Muslims suffer the worst education failure rates, huge barriers to employment, bad housing and chronic political under-representation. These are the issues that have to be addressed if we are to build an integrated society.

The report makes a number of recommendations for tackling social and economic disadvantage among Muslims, including new skills training and regeneration strategies. It also calls for greater efforts to improve representation of Muslims in the public and political life of the capital.

The tabloid hysteria against Muslims unleashed by Jack Straw’s comments has led to physical attacks, firebombings and assaults on women.

As Guardian journalist Jonathan Freedland observed, if the media had launched a similar onslaught against the Jewish community he would have been looking for his passport.

Indeed, the parallels between the Islamophobic hysteria of today and the anti-semitism of the 1930s are striking. We should say bluntly that the same methods are now being used against Muslims as have always been used against Jews.

In the 1930s anti-semitism was fed by the drip, drip, drip of attacks on the Jewish community by newspapers like the Nazi-supporting Daily Mail.

Today’s fascists feed on the daily drip of Islamophobia in the media, and their anti-Muslim hatred is given legitimacy by mainstream politicians pandering to prejudice.

To defeat the fascists in the 1930s it was essential to stand shoulder to shoulder with the Jewish community. Today the labour movement and all progressive forces must take a stand alongside the Muslim community in resisting these attacks.

I would urge all Morning Star readers who can to attend the Central Hall rally on November 20 where these issues will be discussed.