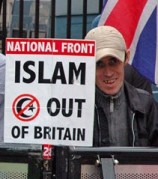 “I will not tolerate the persistent demands, led by Muslim activists, for special protection for religious views. People should be allowed to attack religious ideas in ways which adherents may find offensive – whether by criticism, lampoon or even insult. I organised the Parliamentary campaign that last year voted down – by a margin of one – a Government plan to outlaw the incitement of religious hatred.”

So it’s not just just criticising, lampooning or insulting a religion that Harris defends but also the right to incite hatred against it. Little wonder, then, that his actions over the Racial and Religious Hatred Bill were applauded by the far Right, against whom the Bill was aimed. As one National Front activist wrote in appreciation of Harris’s efforts:

“Evan Harris is not a perfect MP but nevertheless he has spoken out on a number of important issues where others have remained silent. For instance he has campaigned against special religious education for minorities. He has opposed the hijab and was one of the few to criticise it in public. Harris is a defender of freedom of expression…. The government is attempting to legislate against ‘religious hatred’. All patriots must oppose this proposed law which could be used against us. You will find that Harris will be one of the most articulate spokesmen against this law.”