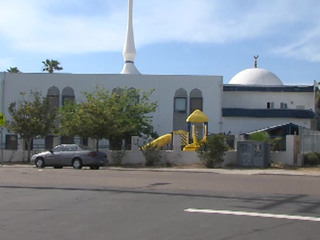 SAN DIEGO — Investigators sought Tuesday to determine who was responsible for several recent bomb threats directed at a Muslim school in Clairemont.

On Saturday, a woman left three menacing telephone messages on an office answering machine at the Islamic School of San Diego, authorities reported. Among other hostile statements, the anonymous caller said, “I’m going to throw a bomb in your (expletive) school,” according to the Council on American-Islamic Relations, which reported the incident to the FBI and the San Diego Police Department.

“Because of this and other reported threats, we urge local, state and federal law enforcement authorities to investigate the incident as a hate crime,” said CAIR-San Diego Civil Rights Director Sadaf Hane.

“We have had our mosques threatened, community centers, Islamic schools and other facilities have been targeted at various times,” said Hanif Mohebi with CAIR-San Diego.

Staffers at the school, which also received a phoned-in bomb threat in late April, have been working with area law enforcement agencies to review and refine their security measures at the Eckstrom Avenue campus.

Authorities are treating the incident has a terrorist threat, but if more evidence comes to light, it will then be treated as a hate crime.

The Islamic Center is the cultural center for scores of Muslims in San Diego. Aside from services, the center offers lectures and hosts the kindergarten through eighth-grade campus school.