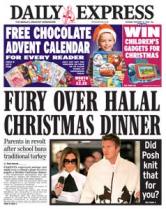 The headteacher announced that she intended to replace the children’s traditional turkey meal with halal chicken. She explained that eating poultry which had been slaughtered in the Muslim way would create an “integrated Christmas”.

But furious parents accused the school of undermining the Christian faith. They were backed by Labour MP Denis MacShane who demanded to know why the children were not being offered a choice.

After Mr MacShane’s intervention, Jan Charters, head of Oakwood School in Rotherham, South Yorkshire, backed down and youngsters will now be offered a choice of halal chicken or a traditional turkey dinner, costing £1.75.

Nick Seaton, chairman of the Campaign for Real Education, said: “Headteachers and school governors should not make this sort of mistake in the first place. There are a lot of these silly people around who undermine British culture.”