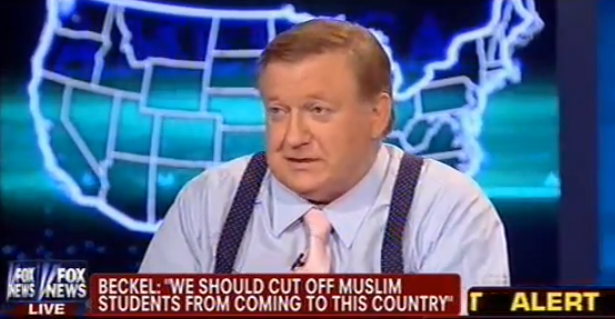 Fox News liberal Bob Beckel had some policy ideas about Muslims on Tuesday’s edition of “The Five.”

Beckel and his co-hosts were talking about the Boston bombing suspects, who are Muslim. The general consensus seemed to be that, by probing into their lives and their possible motives for the attacks, members of the media were avoiding the main issue.

“You find the big argument, which is Muslim supremacy, isn’t that all you need?” Greg Gutfeld asked. “Why do you have to delve into their psychosis?”

“We know that in the Muslim communities around the world, they do not like us,” Beckel replied. “They recruit people from poor areas and turn them into terrorists.” He didn’t say how this thesis was connected to the Tsarnaev brothers, who came legally with their family when they were 9 and 16.

“I think we really have to consider…that we’re going to have to cut off Muslim students from coming to this country for some period of time so that we can at least absorb what we’ve got, look at what we’ve got and decide whether some of the people here should be sent back home or sent to prison,” he continued.