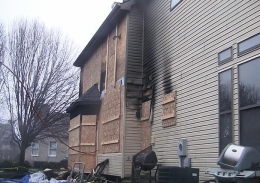 “One second I’m comfortable in bed, and the next second I’m running out of the house in the freezing cold, running for my life,” recalls Mohamed Soltan.

Soltan, a sixth-year in economics at Ohio State, and his roommate Ahmed Mahmoud, a third-year in finance, were victims of arson in their Hilliard home on Martin Luther King Jr. Day. The FBI, along with the Hilliard Division of Police, have yet to identify the culprit of the arson that caused hundreds of thousands of dollars in repairs.

Mahmoud, the first of the two to discover the fire, said although he did hear what he described as a “loud banging noise,” it was not until the smoke detectors went off that he realized the house was on fire. “I immediately ran into Mohamed’s room and woke him up. That’s when we realized the situation and what’s going on, and we got out of the house,” Mahmoud said. “At first, I figured it was Mohamed moving around. I was laying in bed and all of a sudden the smoke detectors went off.”

Soltan said he was in a deep sleep, and it wasn’t until Mahmoud woke him up that he became aware of his surroundings. “I’m a very heavy sleeper, and I remember Ahmed coming into my room shouting ‘Soltan, Soltan, there’s a fire’,” Soltan said.

Both men said they did not actually see the fire, but they were surrounded by thick clouds of smoke as they made their way out of the burning house.

Soltan calls the arson a hate crime, saying there was no way the fire was an accident. “We don’t use the fireplace; I make sure that (when) I cook, I turn everything off, so there is no way this could’ve been anything else but a hate crime,” Soltan said. “So for someone to purposefully set the house on fire while people are sleeping at five in the morning, there is no other explanation for it that these people are attempting to kill my friend and I.”

Doug Francis, chief of police for the city of Hilliard, said the origins of the fire seemed “suspicious,” due to the lack of burn patterns, the fire’s point of origin and the use of flammable materials.

“Our investigations show that there was in fact an accelerant utilized in the home, and they ruled out any natural cause of the fire, and so with utilizing their tools, they determined it was an arson,” Francis said.

Francis said the FBI and the Norwich Township Fire Department are also involved in the investigation. Francis contacted the FBI because there have been previous reports of Soltan’s home and car being painted with anti-Arab and anti-Muslim slurs.

“We immediately brought in the FBI simply because if we did determine it was in fact an arson, we also wanted to look at it as a potential hate crime,” Francis said.