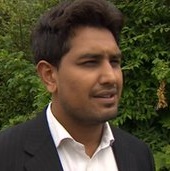 Police investigating a city councillor for sending an allegedly racist message on social media have dropped their case against him.

Dipu Ahad, who represents Newcastle’s Elswick ward, was quizzed by Northumbria Police after members of the public complained he had retweeted an image racially targeting the far-right English Defence League. But the case was dropped over a lack of evidence and Mr Ahad denies the tweet had racist overtones.

He said: “I’m glad that the Crown Prosecution Service have seen sense and they realise what I do in the community and that the tweet wasn’t racist. I’m not saying that I didn’t retweet it, but sometimes you tweet something and it comes up as a link and the picture doesn’t come up. This has been a campaign against me from the far right. It is sad that the police have questioned me over this.”

The message is alleged to have been shared on Twitter by the Muslim father-of-two on March 10 and contains an image of a loaf of bread containing the words ‘white’ and ‘thick’ on its packaging. Shortly afterwards, he was questioned by the police and spoken to by senior staff at Newcastle City Council after two members of the public complained.

However, friends of Mr Ahad leapt to his defence following the incident. Aaron Lipsy, Rabbi of the United Hebrew Congregation in Newcastle, who works alongside him to organise the city’s Holocaust Memorial Day, said Mr Ahad works tirelessly to fight against racism. Tony Dowling from the National Union of Teachers said he was against prejudice of any kind.

Mr Ahad said the alleged tweet is the latest in a string of smears from far-right groups which include a website that has been made about him. He said: “From my point of view this has been part of an ongoing campaign from the far-right. I work really hard in this community in regards to race relations and everybody knows that.”