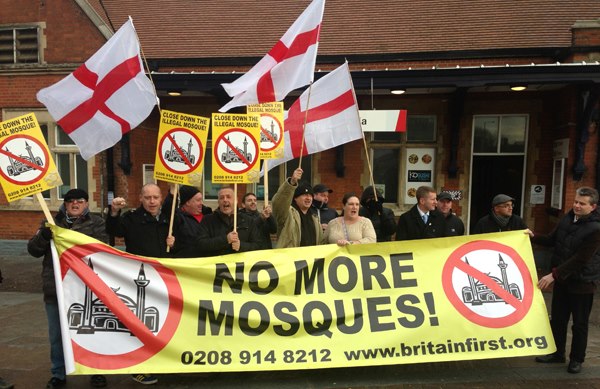 The setbacks suffered by the English Defence League – shrinking numbers attending its demonstrations, its leader in prison, its deputy leader arrested for incitement to racial hatred – are seen by others on the far right as an opportunity to build a new organisation under their own control to replace the EDL.

EDL News draws our attention to a far-right unity meeting that took place in Dartford at the weekend, evidently on the initiative of the group Britain First, the aim of which was to “lay plans for a unified, well organised new street protest movement”.

Britain First was formed as a breakaway from the British National Party. Its leaders are former BNP councillor Paul Golding and Jim Dowson, who headed the BNP’s at one point highly successful fundraising operation.

So far, Britain First’s attempts to emulate the EDL have not been marked by any notable success. Despite all sections of the far right being invited to participate, its protests against “Muslim grooming” and against a Southend mosque attracted very limited support. Dowson, however, has recently been playing a prominent role in the loyalist flag protests in Belfast and no doubt fancies himself as the leader of a new mass movement against Islam in Britain.

One of the participants at the Dartford event was Paul Pitt, the EDL’s former South East organiser, who last year was responsible for holding demonstrations against a proposed mosque in Chelmsford. In July he led a few dozen EDL members through the town in a flash protest during which they shouted racist abuse at passers-by and chanted “You burn our poppy, we burn your mosque”. Pitt has since broken with the EDL and has launched a new organisation called the South East Alliance, which piously claims to be a “non-political community based street movement”.

Also worth noting is the presence at the Dartford meeting of English Democrats party leader Robin Tilbrook. Although the EDP is not itself of fascist origin it has attracted a significant number of former BNP members as a result of the crisis in that party, notably the BNP’s one-time elections organiser Eddy Butler. Dowson himself has pursued a twin-track approach of building Britain First while at the same time placing his fundraising abilities at the service of the EDP (presumably in exchange for a large cut of the proceeds).

The EDP is a political party that is committed to pursuing an electoral strategy, which it has done with some limited success. It won the election for mayor of Doncaster in 2009 and did quite well in last year’s police commissioner elections, coming second in South Yorkshire with 15.6% of the vote. It is difficult to believe that Tilbrook is so stupid as to imagine that association with a revamped anti-Muslim street movement with its full complement of racists, fascists and thugs would boost his party’s appeal to voters. Even if he is, it is likely that many members of the EDP will disagree.