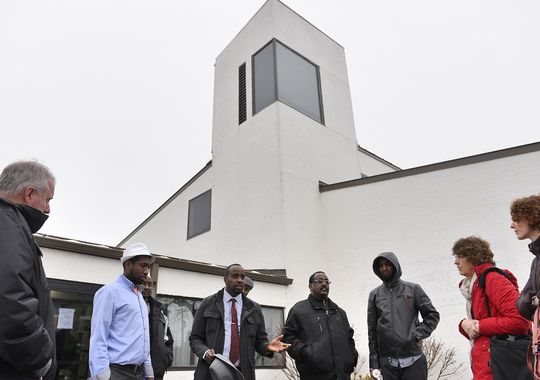 St. Cloud-area religious leaders said Sunday they stand with the Muslim community after a series of vandalism at the Central Minnesota Islamic Center.

Religious and community members, including members of the Great River Interfaith Partnership, met Sunday at the Islamic center on Fourth Avenue South. In the past month four incidents of vandalism have been reported there.

About 25 community members discussed the issue and looked at the damage done to the center. On Monday, Islamic center officials will meet with Bishop Donald Kettler.

Abdul Kulane organized the meeting and said he wanted to get support from the greater community. “We invited you to give some validity,” Kulane said. “We called you because we know you care.”

St. Cloud police continue to investigate the incidents and have increased patrols in the area. In late November someone broke the front window and community members had their vehicles damaged when they were parked for prayers before sunrise, center spokesman Mohamoud Mohamed said.

Mohamed said he does not understand why someone would target a building that is for peaceful praying and gathering. “This building is a symbol of this community,” he said. “The community has no value if it cannot show a symbol of freedom.”

Ahmed Abdi is secretary of the Islamic center. He said he left about 10 minutes before the Dec. 15 incident occurred. He said he is worried about his safety and safety of others who come to the center.

The Rev. Randy Johnson is the associate pastor at First United Methodist Church. He said as a community they have been here before, pointing at incidents in 2007 when a Muslim man was assaulted after leaving a mosque and cartoons put up near Somali-owned businesses in 2009 that depicted the prophet Muhammad.

“We stood with you then,” he said.

He said it’s a small minority that’s causing the damage. “We are not going to allow those voices to speak for our community,” Johnson said.

Through an interpreter, Imam Muhumed Ahmed thanked the community members for meeting Sunday. “Even though the motive of the individuals doing this is not yet known, the pattern is a concern to us to a point where our congregation feared for their own safety,” he said.

The center has plans to install surveillance cameras around the building and is raising the money to do so.

At the end of the meeting Johnson read a statement from the Rev. Steve Cook who is the past president of GRIP.

“We stand in solidarity with our Muslim neighbors and their leaders against this vandalism and we want to clearly say there is no way that this vandalism can be justified in the name of Jesus Christ, or of the Christian faith,” Cook said in the statement.