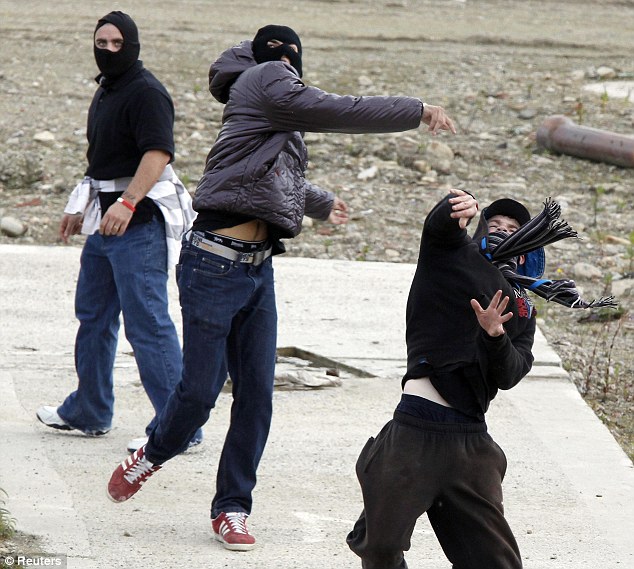 A father-to-be has been jailed after he was caught on camera throwing lumps of brick or concrete at police lines during violent clashes at an English Defence League protest in Bradford city centre.

A judge heard yesterday that 28-year-old Michael Currie was the only person to have ended up at the city’s crown court following the disturbance in August 2010. Prosecutor Paul Gallagher told Recorder Peter Pimm 13 other people were arrested, but the majority had been dealt with by way of fixed penalty notices for disorderly conduct.

The court was shown aerial footage taken from a police helicopter of the protest, which took place at the Westfield Broadway building site. The judge then watched another recording which showed Currie throwing missiles towards officers after he and others in the crowd had scaled a hoarding surrounding the site.

Currie, of Beechwood Mews, Blackburn, who had previous convictions, was arrested about eight months after the disturbances. Last November, he pleaded guilty to a charge of affray and yesterday he was given a 16-month prison sentence for that offence. Recorder Pimm also imposed a further eight months in jail for other matters, including breaching a suspended sentence order.

The judge told Currie, whose partner is expecting their first child next month, that it was a testament to the equipment the officers were wearing that no-one was injured as protesters rained down missiles on the them from their vantage point.

“We are very fortunate in this country that we have the freedom to conduct public protests provided they are peaceful,” said Recorder Pimm. “That right is undermined by people like you who abuse that freedom that we are given in the grossest way imaginable by throwing missiles designed to injure police officers.”