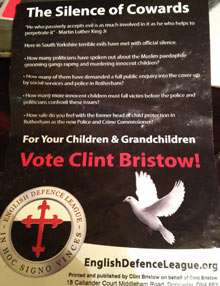 An activist for the far-right English Defence League who stood in the recent Rotherham byelection has been remanded in jail on burglary charges.

Brian Clint Bristow, usually known as Clint, came last in the 29 November byelection with just 29 votes. A little over two weeks later, on 16 December, the 39-year-old was charged by Humberside police with burglary. After being refused bail, he was remanded in custody and spent Christmas in jail.

He is accused of trespassing on private property and stealing toiletries, money and a mobile phone then making threats of violence. The alleged burglary took place in the coastal village of Bempton, near Bridlington.

Bristow was refused bail at Bridlington magistrates court and the case has been transferred to Hull crown court.

There was a blank space next to Bristow’s name on the ballot paper in November’s by-election in Rotherham. But he worked as a local organiser for the English Defence League in nearby Doncaster. His election leaflets bore the EDL logo and urged voters in the South Yorkshire town: “For your children and grandchildren, vote Clint Bristow!”

He campaigned on the issue of child sexual exploitation, saying: “How many politicians have spoken out about the Muslim paedophile grooming gangs raping and murdering innocent people?” His leaflet, The Silence of Cowards, quoted Martin Luther King: “He who passively accepts evil is as much involved in it as he who helps to perpetrate it,” it said.

Bristow is expected to appear at Hull crown court this month.

As we noted during the by-election campaign, Bristow was jailed in October 2011 after being convicted of threatening behaviour for his part in an attack on an Islamic literature stall which followed an EDL demonstration outside the Israeli embassy in London.

He was also given a five-year CRASBO (criminal anti-social behaviour order) which prohibited him from attending any EDL march, demonstration or similar event in England and Wales without having notified a specified email account of Westminster police at least seven days before the event.

We have it on good authority that Bristow didn’t provide Westminster police with the required notice of leafleting and other EDL events and activities that he was involved in during the by-election campaign. So you might wonder why the police and Crown Prosecution Service have failed to charge him with breaching his CRASBO.