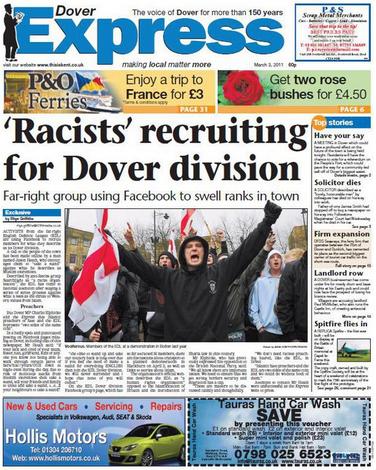 Activists from the far-right English Defence League (EDL) are using Facebook to recruit members for what they describe as its Dover division. A call to the people of the town has been made online by a man named Jason Heath, who encourages them to “take a stand” against what he describes as Muslim extremists.

In a badly spelt and punctuated posting on Facebook pages relating to Dover, including that of this newspaper, Mr Heath said: “if your sick and tired of your mum, sister, nan, girlfriend, kids or anyone you know not being able to walk through certain parts of hers/his//yours/OUR town at night even during the day, due to risk of molitious atacks from muslim extremists then take a stand, tell your friends and family to unite and take a stand, t…e…ll your neighbours to take a stand!!

“the time to stand up and take our country back is long over-due if you feel the need to make a stand for everything ENGLISH then join the EDL Dover division. we will never surrender and i hope that none of you will either.”

On the EDL Dover division Facebook group’s page, which has so far attracted 36 members, there are discussions about transport to a planned demonstration in Blackburn on April 2, as well as links to stories about Islam.