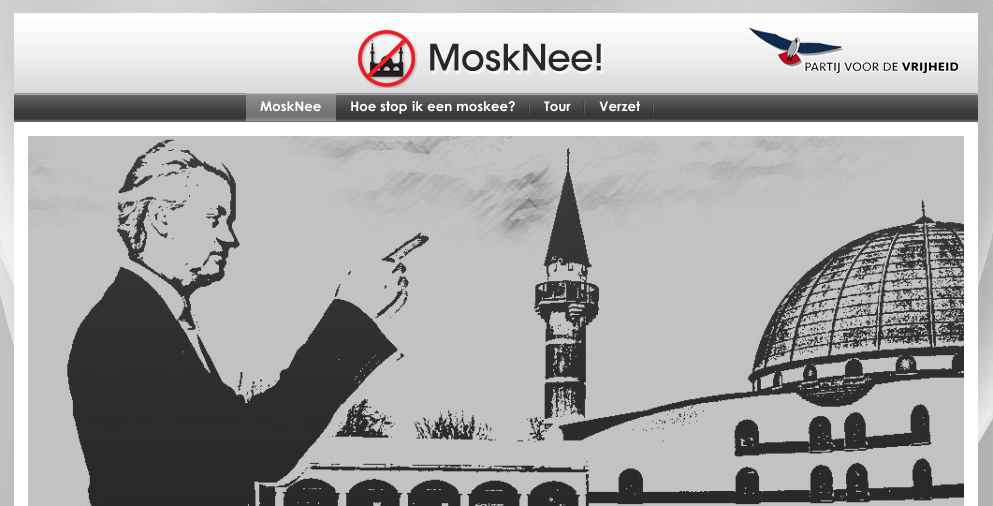 An unidentified man wearing a hoodie placed fireworks in the window of the Selimiye Mosque in Enschede, a city in the Netherlands, on December 14. A few seconds later, the fireworks exploded, breaking the window.

The motives of the perpetrator remain unclear – he has not yet been caught – but mosque board member Sezgin Akman said he suspects the attack was inspired by hatred of Islam. “Maybe someone wanted to tell us we are not welcome,” he said, adding the mosque has received several threatening letters in the past.

More than one-third of the Netherlands’ 475 mosques have experienced at least one incident of vandalism, threatening letters, attempted arson, the placement of pigs’ heads, or other aggressive actions in the past 10 years, according to research by Ineke van der Valk, author of the book Islamophobia and Discrimination.

The Kuba Mosque, in the city of IJmuiden, said it has counted more than 40 such incidents since its founding in 1993.

“Lines like ‘go to hell, Muslims’ on the wall, graffiti that contains Nazi symbols, pig heads on the doorstep, Molotov cocktails … A lot has happened,” said Suleyman Celik, a board member of the Kuba Mosque. “Two years ago, a female visitor who left the building was pelted with beer bottles by men driving by in a car. She broke her teeth and had to go to the hospital.”

On June 23, two men shouting racist slogans entered the Kuba Mosque after an argument outside. They threatened to kill those inside, and broke the nose of one of the mosque’s board members. They were arrested two days later by police.

Van der Valk has found that attacks on mosques happen more frequently in small rather than large cities, adding that “many of these attacks appear to be a response to national or international events, such as a terrorist attack or Dutch jihadists leaving to Syria to join terrorist groups”.

About 160 Dutch Muslims are believed to have joined armed groups such as the Islamic State in Iraq and the Levant (ISIL), raising fears that they might carry out attacks in the Netherlands when they return. A few pro-ISIL demonstrations have even taken place in The Hague.

Far-right: ‘Wrecked by immigration’
For their part, Dutch Muslims blame what they describe as biased media coverage of Muslims and far-right politicians such as Geert Wilders for inciting mosque attacks.

In the past, Wilders’ far-right Freedom Party (PVV) has compared the Quran, Islam’s holy book, to Adolf Hitler’s Mein Kampf; has called Islam a “fascist” religion, and has proposed raising taxes on headscarves. On November 26, Machiel de Graaf, one of the PVV’s members of parliament, claimed that “Dutch schools are overwhelmed with a number of children who are named after Mohammed”.

“The Dutch unity, identity and culture are being wrecked by immigration and via wombs. Various Islamic leaders have said this, such as Qaddafi,” de Graaf said during a debate about integration.

However, the PVV denies its politicians’ statements regarding Muslims and Islam incite aggression.

“We are against all forms of violence, violence against mosques included. We do not promote that,” Michael Heemels, a party spokesman, told Al Jazeera on behalf of Geert Wilders. “But we do feel that it is terrible that more mosques are being built in this country. Mosques don’t belong here.”

The PVV’s website offers tips for Dutch citizens to prevent the construction of mosques in their neighbourhoods. Research by van der Valk shows that newly built mosques are attacked more often than older ones.

‘We should be more open’
Mohamed Amezian, the chairman of a mosque in the southern city of Roosendaal, told Al Jazeera in 2010 a sheep’s body was placed on the construction site where the mosque was to be built. Green paint on the fur read, “No Mosque.” But Amezian said he thinks the attack was likely “an act of a loner”.

“After the mosque was opened, we talked to a lot of people in the neighbourhood. Some were against the building of it, perhaps because they were afraid that would decrease the value of their homes,” Amezian said. “But soon after that, they invited their friends and family to come over to see how beautiful it is.”

Like many Muslims, Amezian said mosques have a responsibility to involve local, non-Muslim residents. That’s why he organises football matches for children and barbeques for the whole neighbourhood. “I am not afraid of the people in this country, and I do not want people being afraid of me,” he said. “As a Muslim and a Dutchman, I think we should be more open to each other.”

Tracking Islamophobia
In addition to “more openness from both sides”, the police can also contribute to the prevention of violence against mosques, Ahmed Marcouch, a member of the House of Representatives for the Dutch Labour Party, told Al Jazeera. In the Netherlands, he said, vandalism or attacks on mosques are often registered as “insults” or “destruction of property”, without mentioning the underlying motives.

An umbrella organisation for the Netherlands’ Jewish population has kept track of the number of anti-Semitic incidents since the 1980s. No similar counts have been made of anti-Muslim incidents in the country.

Next year, though, that is set to change. In 2015, two groups – SPIOR (Foundation for Islamic Organisations Rijnmond) and RADAR, an organisation opposing discrimination – plan to work together to monitor attacks and discrimination against Netherlands’ Muslims.

“It is important to register forms of Islamophobia,” said Marcouch. “Islamophobia is a serious offense. If we make that clear, we also give a signal to the perpetrators: We do not accept this.”