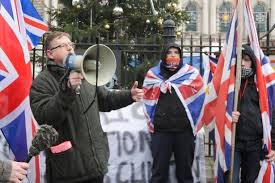 A Scots extremist is the man behind the sickening invasion of mosques across the country. Jim Dowson, former second-in-command of the neo-Nazi British National Party, now heads the Britain First Defence Force.

Britain First claimed to be carrying out a “Christian crusade” when their activists barged into what they called mega- mosques in Glasgow and Cumbernauld. They confronted the imam of the mosque in Cumbernauld before handing out British Army-issue Bibles and leaflets about so-called Muslim grooming gangs.

Dowson, originally from Airdrie but now living in Belfast, has links to loyalist paramilitary heavies and is an anti-abortion militant. He was one of six candidates standing in the European Parliament elections in Scotland for Britain First.

The 49-year-old had to quit the BNP amid claims he groped a female party activist in 2010. But he insisted he was being smeared because he was a party hardliner.

Matthew Collins, of anti-racism group Hope Not Hate, described Dowson as “the cash cow of the far right”. He said: “Dowson is the man behind Britain First – he founded it and funds it. His new tactic with these mosque invasions is very concerning.

“It is the same old, vicious hatred dressed up in new phrases. Instead of saying they hate black or Asian people, these dangerous clowns say they are against the Islamisation of Britain. It is nonsense but it is dangerous nonsense.

“Their use of language is clear – they are just as radicalised as the people they claim to hate such as Anjem Choudary. This kind of sickening extremism has made Dowson a rich man. It is very concerning that his bunch of Neanderthals are now bursting into mosques to hand out stolen Bibles to startled worshippers.”

Dr Muhammad Kausar, of Glasgow Central Mosque, said: “They came in dressed in Army-type clothes giving out Army Bibles. They were filming on a camera. They talked about grooming gangs and that kind of thing and they were told that Islam is not in favour of anything like that at all. This group is full of troublemakers who seek to spread disharmony and unrest. They are Islamophobic and blasphemous.”

In a statement, Britain First described how their units headed for Glasgow Central Mosque in the Gorbals. They said: “Once inside, our activists handed out the leaflets and Bibles and told them to do something to avoid any grooming gang scandals. Our activist units will be very busy throughout the summer with our Christian crusade in Scotland and also campaigning to keep Scotland.”

Dowson has a string of convictions, including weapon possession. His hardline Life League group stormed buildings in Dublin in 1999 in their crusade against abortion. Last year, he was arrested in connection with the Northern Ireland flag riots. In court, he wore a white jumpsuit with the words “political prisoner” on the back.

Britain First chairman Paul Golding is a longtime ally of Dowson. Golding is a former BNP councillor and editor of the BNP’s flagship magazine. In 2011, Dowson and Golding announced the formation of Britain First – to protect “British and Christian morality”. Earlier this year, Golding said those who stand up for their country “face politically-correct pressure from the state”. He also caused outrage by wearing underpants on his head at a Remembrance Service.