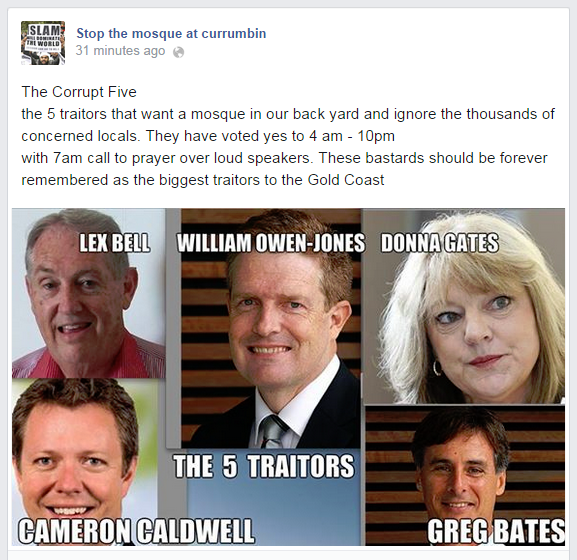 Police told the Bulletin the threats were of a “non-specific” nature but related to both councillors supporting the approval of the mosque at Wednesday’s planning committee meeting. They were among five councillors who voted to support the project, including Lex Bell, Greg Betts and Donna Gates.

Queensland Police confirmed threats had been made and said the investigation was ongoing. Threatening a public official is a crime in Queensland.

Currumbin councillor Chris Robbins, who voted against approving the mosque, has also been threatened.

Cr Bell, a former lawyer, called for calm and said threats of violence against councillors was inappropriate and uncalled for. “I understand people are upset but they should control themselves,” he said.

Wednesday’s council meeting was marred by a radical anti-­Islamic protest at Evandale which city and community leaders dismissed as a “redneck” movement.

Yesterday’s threats came after weeks of abuse hurled at Cr Robbins while the controversial development was under public discussion. Cr Robbins said she had received threats of gang-rape and murder from anonymous opponents.