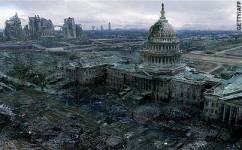 “Stills from a video entitled Nuclear Jihad: The Ultimate Terror, were posted on al-Ekhlass and al-Hesbah, two password-protected websites believed to be affiliated with al-Qa’eda.

“The images were created to facilitate discussions of the feasibility of nuclear strikes on the US or Britain, according to the SITE Intelligence Group, which released the images.”

Except that the images were in fact lifted from a computer game called Fallout 3.