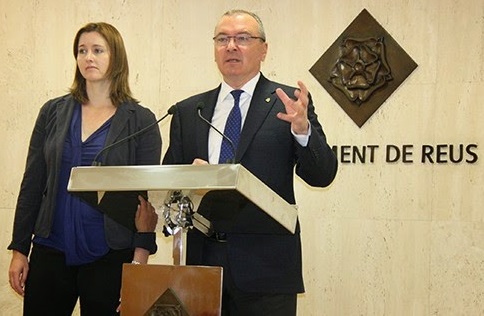 The Reus city council, in the Catalan province of Tarragona, on Friday approved new bylaws that will ban people from wearing a burqa, niqab or any other kind of full face veil in public places.

The measure is the first to go so far in Spain, given that other such local legislation had only banned such clothing on municipal-owned premises.

The measure was passed thanks to votes from the coalition government in the city council, made up of the conservative Popular Party (PP) and the Catalan nationalist bloc CiU. The opposition parties – including the Catalan Socialists, PSC – all voted against the measure.

The local government had called for the prohibition based on criteria of “security” and “coexistence.”

CiU and the PP initially wanted to introduce fines of €750 for wearing this clothing, but the mayor, Carles Pellicer (CiU), and the deputy mayor, Alicia Alegret (PP), [pictured] admitted that they would not be able to apply such penalties. The police will simply have powers to identify anyone who has their face covered in public spaces.

“According to a sentence from the Supreme Court from February 13, 2013, municipal powers do not allow for fines for people with their face covered due to religious reasons,” a juridical report commissioned by the PSC reads. “If the municipal authority does not observe this limitation to its powers to levy fines, it could be committing the offense of perversion of justice.”

Reus says that it is backed by a recent sentence issued by the European Court of Human Rights in Strasbourg, which backed a similar ban in France.

“Until there is superior legislation that allows us to apply these fines, no one wearing a burka will be sanctioned,” explained Alegret.

After months of controversy, CiU and the PP presented amendments to their own legislation, getting rid of the terms “niqab” and “burqa” and replacing them with clothing “of any type or form or accessories that impede identification or make it more difficult.” The two parties tried to soften the text in order to secure the support of the opposition parties, but failed to do so.

The council vote was carried out in the presence of a large number of police officers, despite there being few members of the public in the gallery. No incidents took place during the session. “When we have the opportunity and the law supports us, we will begin to issue fines,” the mayor warned.

The PSC spokesperson, Andreu Martín, called the measure “electioneering,” and was highly critical of the local government, arguing that the bylaw could have serious consequences for women as it could mean they have “difficulties accessing municipal services.”