Councillor Alyas Karmani (Respect, Little Horton) called for the proscription of the “racist and fascist organisation” who came to Bradford to protest earlier this month.

But Council leader David Green (Lab) said: “I think proscription at this stage is a step too far.” He also slammed the EDL as “racist thugs”.

Coun Glen Miller called the EDL an “abhorrent, racist organisation”, but added: “If they were proscribed tomorrow they would just call themselves something else. Banning them gives them the publicity they need.”

The Council resolved to write to Home Secretary Theresa May calling for an urgent review of whether councils and the police should be given the power to ban violent and racist demonstrations.

Update:  The EDL are of course very pleased with the refusal to back a ban: 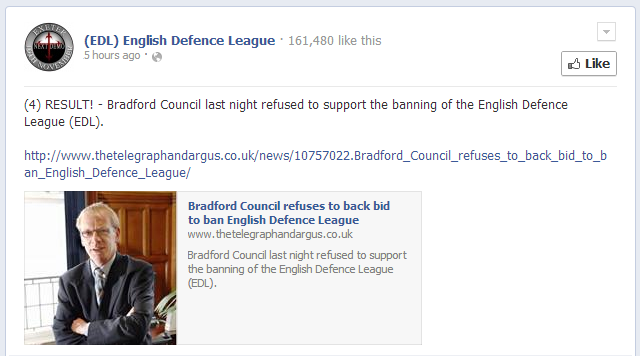