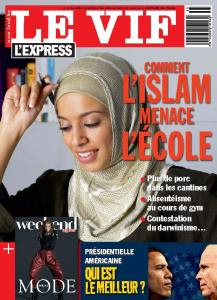 Belgian French-language magazine Le Vif/L’Express has come out with a five page spread in its August 29th issue about Islam in the Belgian school system.

Sadly, the article itself is not available freely online, though I understand it doesn’t really bring any new data. Most schools in Brussels ban the veil, but there are other Muslim requirements from the school system – offering halal food or banning pork, enabling girls to drop gym and swimming classes and not to attend school outings, enabling students to fast at Ramadan, and giving students a place to pray at school.

The article claims that teachers and principles feel they can’t handle the situation. Not only in the case of science and creationism, teachers feel they’re being forced to adapt the curriculum in other subjects such as geography and history so as not to offend students.

Part of the criticism is that besides noting that 30% of schoolgirls in Brussels are Muslims, the article does not give factual data on how many such cases of demands there are from Muslim students and parents.

I received a response from Karim Chemlal, head of the League of Muslims in Belgium, who accuses the exposé of being shallow and not going into the real debate. He points to a study that says Islam is sometimes used as an excuse by students whose true motive is to provoke the system.