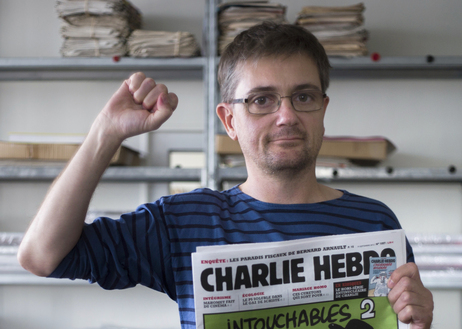 A French satirical magazine published nude cartoons of the Prophet Mohammed Wednesday, a move that could further inflame tensions after violent protests in the Muslim world over an anti-Islam film.

The cover of Charlie Hebdo shows a Muslim in a wheelchair being pushed by an Orthodox Jew under the title “Intouchables 2”, referring to an award-winning French film about a poor black man who helps an aristocratic quadriplegic.

Another cartoon on the back page of the weekly magazine show a naked turbaned Mohammed exposing his posterior to a film director, a scene inspired by a 1963 film starring French film star Brigitte Bardot.

Presumably the message contained in the Charlie Hebdo cover cartoon is that satirists should have the right to abuse Jews as well as Muslims. I suppose this does at least have the merit of avoiding the hypocritical argument that Islamophobia is more acceptable than antisemitism.

“This is a satirical paper produced by left-wingers and when I say left-wingers that goes all the way from anarchists to communists to Greens, Socialists and the rest. Above all it is a secular and atheist newspaper. When we attack the Catholic hard right … nobody talks about it in the papers. It’s as if Charie Hebdo has official authorization to attack the Catholic hard right. But we are not allowed to make fun of Muslim hardliners. It’s the new rule … but we will not obey it.”

This just underlines the hypocrisy and doublethink that afflicts a substantial section of the French left over the question of Islam and Muslims. Charbonnier apparently can’t see how attacking the “Catholic hard right” in a country where Catholicism is the mainstream faith of the white majority population is very different from attacking the religious beliefs of the non-white Muslim minority community, particularly in a situation where Muslims are the subject of a racist hate campaign by the far-right Front National. And gratuitously insulting all followers of Islam by publishing obscene caricatures of the Prophet Muhammad is justified by Charbonnier on the entirely spurious basis that his magazine has a right to “make fun of Muslim hardliners”.