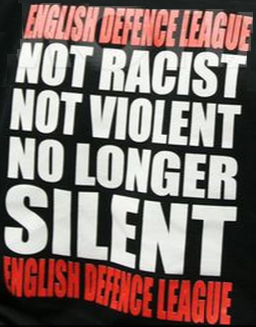 A man entered a shop and told its Muslim owner “I’m a racist and I kill Muslims,” on the first anniversary of the death of soldier Lee Rigby.

Daniel Lee Lewis, of Church Street, Wrexham, entered the shop on Chester Street in Flint after midnight on May 23. He asked the owner where he was from and if he was a Muslim. The owner replied he was Turkish but had an English passport and told Lewis he was Muslim.

Lewis told the owner: “It’s alright, I won’t cause any trouble. It’s my country, I will do what I want. I’m a racist and I kill Muslims.” He spat on the shop floor and invited the owner outside for a fight. But the police had been called and he was arrested.

The 32-year-old told police: “It’s one year today to the death of Lee Rigby, there will be thousands of us in Manchester on Saturday,” before chanting EDL [English Defence League] at them.

Appearing at Wrexham Magistrates Court yesterday, Lewis pleaded guilty to using threatening or abusive words or behaviour with intent to cause racially aggravated fear of or provoke unlawful violence. He also admitted failure to surrender to bail.

He said: “This was extremely upsetting behaviour. You gratuitously made offensive and racist comments to someone who was serving members of the public. It is clear you were very, very drunk but that does not justify using such offensive and appalling language. Taking that into account, it makes this a hate crime, serious enough for a community order and you will pay compensation for the pain you caused the victim.”

Lewis was given an 18 month community order, supervised by probation and the community mental health team. He was ordered to undertake a 10 day ‘eradicating racism and promoting equality programme’, and pay £200 in compensation. In addition he will also pay court costs of £85 and a victim surcharge of £60.

Victoria Lewis, defending, said Lewis had no recollection of the incident. She added: “He isn’t a racist, does not hold these views and does not know where they came from. At the time he was influenced by alcohol and his mental health issues. His business went under last year and he suffered a nervous breakdown. It was a one-off and he wants to get back on track.”

Andrew Connah from the probation service said: “He accepts full responsibility but has no memory of the incident. He is ashamed, maintains he is not a racist and it upsets him to think he behaved like that. He had been drinking heavily, and accepts alcohol is an issue. He had suffered a nervous breakdown and has serious mental health issues. He was sectioned last year and has been signed off until 2016.”