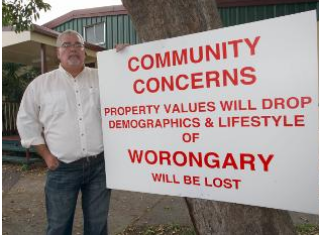 More than 200 objections have been lodged against a mosque proposed for Worongary. The extended period for submissions has now closed and the fate of the proposed Islamic building lies in the hands of town planners and councillors.

The proposal has ignited passions in the community, with two protests on site attracting hundreds of people and prejudicial graffiti sprayed in the area.

A petition against the mosque collected more than 1600 signatures, while more than 200 objections were received by the Gold Coast City Council during the submission period, which was voluntarily extended for two weeks by the applicant – the Islamic Multicultural Association of the Gold Coast.

If approved the mosque would cater for a maximum of 40 people at a time.

Objections lodged ranged from traffic concerns, many taking pains to say it was not on religious grounds, to a mosque in a “Christian” community inviting conflict and even increasing the “carbon output” in the green area.