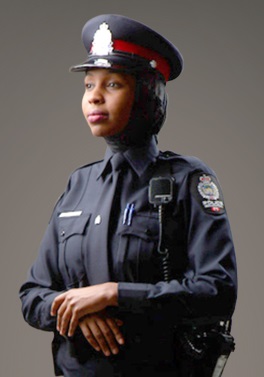 Edmonton Police Services has designed and approved a new hijab female police officers can wear as part of their uniform.

A hijab tailor worked with the police tactics training unit, as well as the police equity, diversity and human rights team, to design a head scarf that covers the head and neck of an officer without covering the face.

“After rigorous testing, it was determined that the head scarf did not pose any risk to the officer wearing it, or reduce officer effectiveness, nor interfere with police duties or public interactions,” reads a statement from Edmonton Police Services. Changes to the uniform policy for police have been approved by various police committees and people in the Muslim community.

“EPS respects a Muslim woman’s choice to wear the head scarf,” the statement reads. “The Edmonton Police Service continues to change with the times, as have a number of police, justice and military organizations in western nations that have already modified their uniforms to accommodate the hijab.”

The police service doesn’t currently have any members or applicants requesting the hijab, but Soraya Zaki Hafez, president of the Edmonton chapter of the Canadian Council of Muslim Women, believes some women may now consider being a police officer, where before they did not.

“This makes Muslim women part and parcel of that community,” Hafez said. “To be accepted, I think it’s a great feeling.” Hafez said some Muslim women wear a head scarf as a way to identify themselves as devout Muslims. It is mentioned in the Qur’an, Hafez said. “It means that they are following their religion closely,” she said. “Islam is a religion of, we submit to God and they feel that God wants them to be this way, cover up.”

Hafez said the uniform hijab has no excess material, but is tailored to the woman’s head. It’s also tied with a snap button, which means it will come off quickly and safely should someone pull it. Regular hijabs are usually tied with pins or sewn stitches, Hafez said. “I think we are a pioneer,” Hafez said of the Edmonton police force. “I think other provinces will follow suit and ask to follow the design.”

If adopted, the proposed Quebec Charter of Values will forbid public servants from wearing religious symbols, including hijabs, turbans and large crucifixes, among other symbols.

Not everyone is happy, however. In a comment piece for the Toronto Sun (“Edmonton police blunder on hijab”) Farzana Hassan has written:

We seek to be “inclusive” of all cultures in Canada – even the ones that shun Canadian values and conspire to undermine its democracy and diversity….

The reality is that wearing the hijab inescapably endorses patriarchy. It tells Muslim women they alone are responsible for preserving a kind of propriety that men have defined, and that if they shirk this responsibility, they will be fair game for all the philandering and promiscuous men out there. By announcing this user-friendly hijab, the Edmonton police have, unwittingly, legitimized a mindset that is rooted in the value system of seventh-century Arabia, one that reduces women to the status of chattel.

Quebec may be different, but their legislators know a thing or two about Muslim garb. For guidance on issues like the hijab and niqab, women’s equality, women’s liberty, freedom and sense of dignity, Canadian authorities need to look eastward to Montreal rather than westward to Edmonton.

Who, you might ask, is Farzana Hassan? She is a former leading figure in Tarek Fatah’s misnamed Muslim Canadian Congress, who in fact represent hardly any Canadian Muslims at all and spend their time assisting right-wing attacks on their co-religionists. Back in 2010, for example, you could find Farzana Hassan and Tarek Fatah supporting the hysterical campaign against the so-called “Ground Zero mosque”.