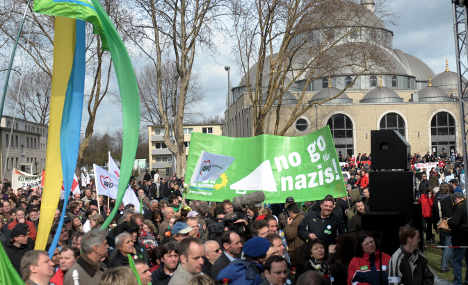 In the western German town of Duisburg, some 5,000 people took part in a peaceful demonstration on Sunday to protest against the right-wing populist Pro-NRW party.

The anti-fascist demonstrators joined a rally organized by the German trade union federation, church groups and politcal parties at the city’s Merkez Mosque – the largest mosque in Germany – which was opened in 2008.

About 150 people attending the far-right Pro-NRW event demanded a ban on minarets, like the one passed in a Swiss referendum last year. The demonstration had originally been planned as a march to the mosque.

At the same time, elsewhere in the city, a further 150 supporters of the extreme right-wing National Democratic Party of Germany (NDP) protested against the “islamization” of Germany.

A large number of police kept the demonstrators and counter-demonstrators separated. “Apart from a sit-down street blockade by about 50 protesters, who had to be carried from the road, there were no unusual events,” said police spokesman Ramon van der Maat. “Our plan worked.”

In the morning, Social Democratic Party (SPD) chairman Sigmar Gabriel had visited the mosque along with the party’s leading candidate for state elections in North Rhine Westphalia, Hannelore Kraft.

The state’s Interior Minister Ingo Wolf praised the work of the police, adding that the Pro-NRW group had originally said that 1,000 people would attend.

The fact that only 150 turned up for the event showed that “xenophobic and antidemocratic rallying cries have no place in a cosmopolitan democracy,” said Wolf.