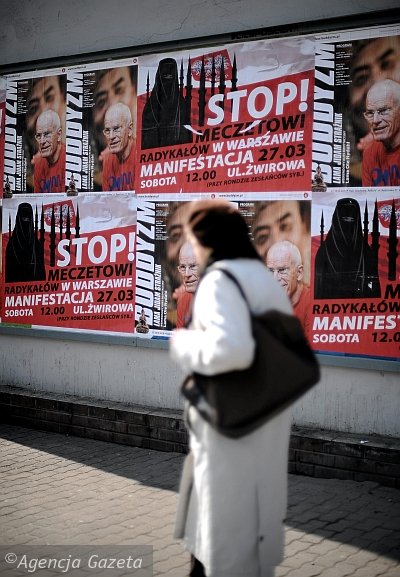 Dozens of people rallied on Saturday in Warsaw to protest plans by the country’s Muslim community to build a second mosque in the city.

Poland’s Muslim population, though growing, is still tiny and such protests are unusual. The event offered evidence that anxieties gripping the rest of Europe are now also taking root in this former communist country, as well.

The emotional rally drew a small group of counter-protesters. Police formed a barrier between the two sides, which had gathered at the mosque’s construction site in an outlying Warsaw neighbourhood.

The anti-mosque protesters said they feared that radical Muslims would use the mosque to gain a foothold in Polish society. They were particularly disturbed by rumours that Saudi money is funding it – a claim that could not be immediately confirmed. “We oppose a mosque built with Saudi money when it’s illegal to have a Bible or cross in Saudi Arabia,” said Rafal Zak, a 31-year-old real estate agent.

The protesters chanted “Radical Islam, no thanks” and held up banners saying “Stop the Radicals” and “Political Islam is threat to Europe”. The counter-protesters carried banners reading “Warsaw is for everybody” and “Stop Islamophobia”.