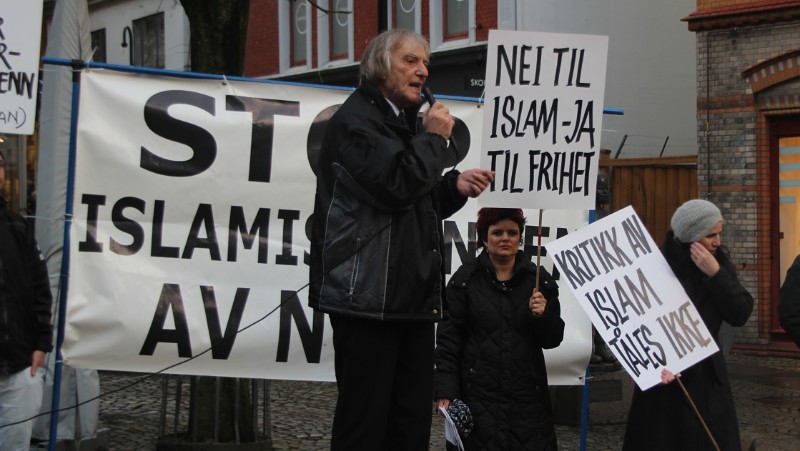 Arne Tumyr, leader of Stop Islamisation of Norway – ‘Norway will be taken over by Muslims’

Norwegian far-right leaders told the court trying Anders Behring Breivik on Tuesday the mass killer was right to fear his nation’s “planned annihilation” by Muslims, even if his method of combating it was wrong.

“The constitution has been cancelled, we’re at war now,” Tore Tvedt, the founder of far-right group Vigrid told the court. Tvedt, 69, with greying hair and moustache, addressed the court in a firm voice. “When they get their will, the Nordic race will be exterminated,” he said of Muslim immigration.

Breivik’s defence team called Tvedt and other far-right supporters to the stand to support their argument that Breivik is sane since his ideology is shared by others, even if their numbers are few.

“Take a look at society in Pakistan, look at the 57 Islamic states. People there live in a regime of terror and slavery, that’s what we had under national socialism and in the Soviet Union, people were trapped in a terror state,” Arne Tumyr, the head of an anti-Islam group told court.

Tall, thin and with a full head of hair, Tumyr, 79, spoke softly and insisted on testifying to the court standing up. “If nothing is done, Norway will be taken over by Muslims,” he said.