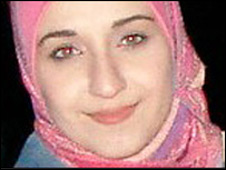 The owner of a hair salon has been ordered to pay £4,000 compensation to a Muslim stylist who was turned down for a job because she wears a headscarf.

Bushra Noah accused Sarah Desrosiers of religious discrimination when she failed to offer her a job at her Wedge salon in King’s Cross, central London. An employment tribunal panel dismissed the 19-year-old’s claim but upheld her complaint of indirect discrimination.

During the hearing Ms Noah, who lives in Acton, west London, told the tribunal that she was “devastated” that she was not offered the job of assistant stylist “due to my headscarf”.

Ms Desrosiers, 32, told the panel that Ms Noah lived too far away, but was persuaded to give her an interview in May last year.

When the applicant arrived for the interview she claimed the Canadian salon owner was clearly shocked by the fact she wore a headscarf. Ms Desrosiers told the tribunal she was surprised it had not been mentioned earlier and expected her staff to reflect the “funky, urban” image of her salon.

The panel found that Ms Noah had been badly upset by the 15-minute interview. She was awarded £4,000 damages for “injury to feelings”.

In its judgment, the panel stated: “We were satisfied by the respondent’s evidence that the claimant was not treated less favourably than the respondent would have treated a woman who, whether Muslim or not, for a reason other than religious belief wears a hair covering at all times when at work.”

It added: “There was no specific evidence before us as to what would (for sure) have been the actual impact of the claimant working in her salon with her head covered at all times.”

Speaking after the ruling the salon owner said: “I never in a million years dreamt that somebody would be completely against the display of hair and be in this industry. I don’t feel I deserve it.”