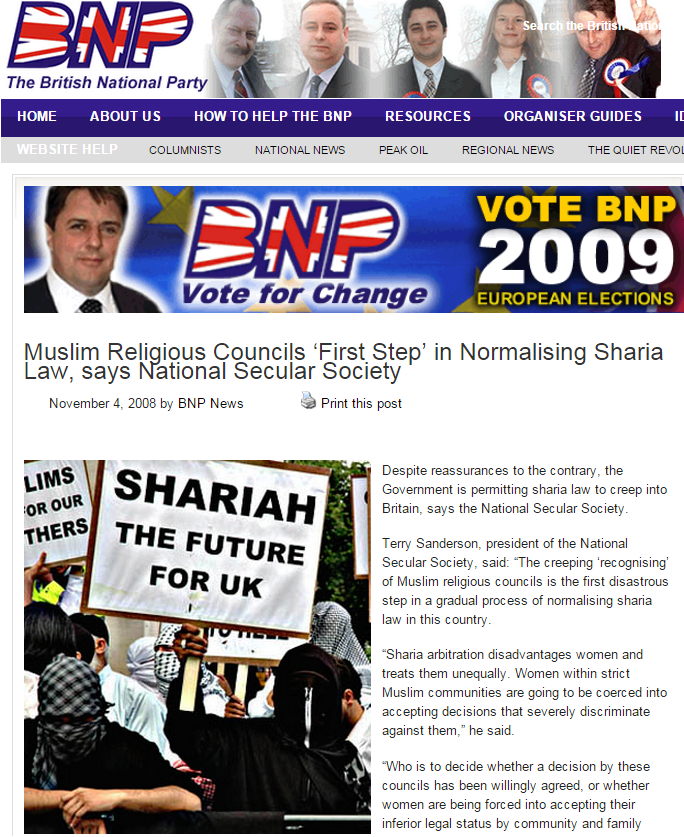 Despite reassurances to the contrary, the Government is permitting sharia law to creep into Britain, says the National Secular Society.

Terry Sanderson, president of the National Secular Society, said: “The creeping ‘recognising’ of Muslim religious councils is the first disastrous step in a gradual process of normalising sharia law in this country.

“Sharia arbitration disadvantages women and treats them unequally. Women within strict Muslim communities are going to be coerced into accepting decisions that severely discriminate against them,” he said.

“Who is to decide whether a decision by these councils has been willingly agreed, or whether women are being forced into accepting their inferior legal status by community and family pressure? The only way to ensure all are equal before the law is to have only one legal system – our secular system.”

Oddly enough, Terry Sanderson doesn’t see fit to provide a link to this piece in his daily news roundup on the NSS website, although any media reference to the NSS is usually publicised enthusiastically. What’s the problem here, Terry? A bit embarrassed, are you, that your hysterical nonsense about the threat from sharia law feeds into the far right’s racist propaganda?