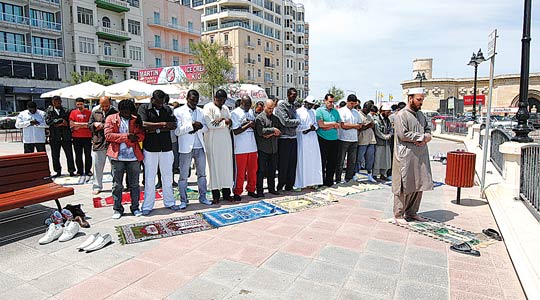 About 50 Muslim men took their prayer rugs to the Sliema front yesterday after the planning authority sealed off their place of worship. The Muslims said the Malta Environment and Planning Authority had locked them out of their flat in Sliema where they used to pray, so they decided to take their cause outside.

“We are not here to protest or threaten violence but to express our fundamental human right to gather in prayer,” Bader Zina, one of the leaders, said. According to Mepa, a number of complaints had been received by neighbours and the flat did not have a licence to be used as a place of worship.

The Muslims, many of whom are Maltese, were dressed in traditional clothing. They had a permit and police protection and said this might become a regular appointment until their flat was reopened.

This behaviour did not go down well with a group of Maltese onlookers who warned that if this happened again “there will be trouble”.

“Malta is a Catholic country. They have no right to come here and pray in front of us. I don’t care what they do in the privacy of their own home but not here,” one Maltese woman said.

“We’ve had enough. If you were to do the same in their country they would stone you. I can’t understand how they could have been given a permit for this, including police presence and all!” her husband added, visibly disturbed by what he saw.

“They should go to a mosque. That is where they belong. Or in some hole somewhere. But not here where I get my children to eat and have a good time. I would have had no problem if they were Catholics praying… in Malta we are all Catholics so it’s not a problem, but not them. Even the tourists were disgusted,” he claimed, as his teenage son nodded in agreement.

Mr Zina said they did not want to anger anyone: “All we want to do is praise God”. He said that besides the Sliema flat, another in Buġibba had also been locked up by Mepa simply because it was used by Muslims to gather in prayer. The residents of the flats had to seek alternative accommodation. “Since when do you need a licence to pray? I don’t see anyone closing down other prayer groups.”