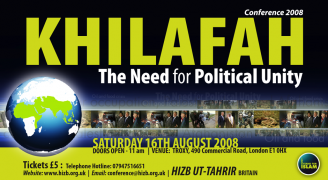 A government minister has condemned a decision by radical Muslims to stage their annual party conference in London’s East End on Saturday.

Labour’s Transport Minister Jim Fitzpatrick said the Islamist organisation Hizb ut-Tahrir, which wants Britain to be an “Islamic” state, was being deliberately divisive choosing Stepney for its conference.

MP Mr Fitzpatrick told the Advertiser that he had “no time” for Hizb ut-Tahrir, an outfit former Prime Minister Tony Blair considered banning. “There’s a strong feeling they should be banned,” said Mr Fitzpatrick. “It’s an organisation that preaches intolerance and division and there should be no place for it.”