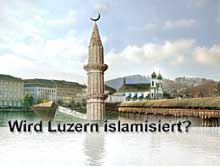 Peter Beaumont warns against the threat from Christoph Blocher and the racist Swiss People’s Party (SVP):

“… the reason why Switzerland is suddenly important is not because of its politics – it’s because it represents the most visible manifestation of the nasty Islamophobia currently rising throughout Europe, that has connected self-avowed liberals such as Martin Amis in the UK with men like Blocher in a spectrum of fear and xenophobia. Tomorrow, it seems likely that the most Islamophobic mainstream party on the European continent will win the largest number of votes by wrapping itself in a fake past. It is a warning to us all.”

See also “Interview with Swiss Justice Minister Christoph Blocher: ‘We must tell the Muslims we are a Christian nation'”, Der Spiegel, 17 October 2007