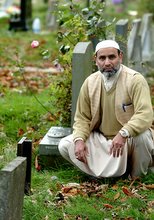 A father, who has been unable to locate his baby’s grave since vandals removed the headstone, said he was heartbroken by another attack on the same Bradford cemetery.

Sajawal Hussain, 49, said he was devastated when he saw the destruction caused by vandals at Bowling Cemetery in Rooley Lane. About 40 gravestones in the Muslim part of the cemetery had been toppled and shattered, prompting a police investigation and high-visibility patrols.

Mr Hussain said the vandalism brought back memories of when the headstone on his son’s grave was stolen earlier this year. He said: “I can’t find my son’s grave any more, I don’t know where it is. It’s heartbreaking, words cannot explain.

Mr Hussain’s son, Ali Shan Ramzan, died in 1986 when he was only 16 hours old. His twin sister survived. Mr Hussain, who has two other daughters and two sons, said the stone marking his son’s grave had been quite small. “It was for a small child, it was just a stone,” he said.

After the marker was removed by vandals Mr Hussain spoke to his son’s funeral directors and cemetery managers who gave him the plot number and location of his son’s grave. But he said it was impossible to pinpoint the exact spot.

He said the recent destruction had reminded the family of the tragedy. “I was so sad, when I told my wife she was so sad as well,” he said.

He said when he visited the cemetery he had been shocked by the extend of the destruction. “I had not expected it to be that bad. There were other people there and they were very dispirited,” he said. Mr Hussain said friends and family of people buried at the site were worried for all the graves there, no matter what their religion.

Anyone with information about the vandalism should contact Bradford South Police on (01274) 376459.