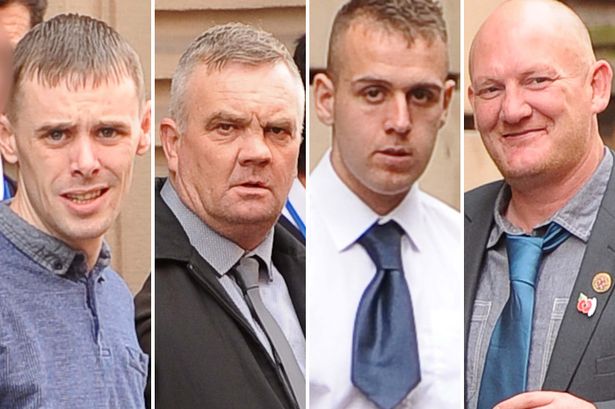 Police were injured and property damaged as English Defence League members tried to break through a police cordon in Birmingham to get at counter demonstrators, a court heard.

David Bennett, prosecuting at Birmingham Crown Court, said around 1,800 EDL supporters had gathered outside Bar Risa by 1pm on the day of the demonstration.

“Officers had become concerned at this stage given the numbers. There were also members of the public with views opposing those of the EDL and there were verbal confrontations,” he said. “It was then decided that the police would move on the demonstrators to Centenary Square. That is when the trouble really began.”

Mr Bennett said the police had set up a cordon in the square to prevent EDL members reaching counter demonstrators in Chamberlain Square. He said the EDL demonstrators attacked the cordon, adding: “There was some pushing and lunging towards the police and kicking and punching. Things were being thrown at police, bricks and stones, things of that nature.”

Reinforcements were drafted in, with officers wearing full protective gear, and the disorder lasted a number of hours, the court heard. Mr Bennett said at one stage the demonstrators used a portaloo as a weapon against police before the situation calmed. “A number of police officers were injured during the course of the incident, a number of demonstrators were injured and a great deal of property was damaged,” he said.

The jury was told one of the defendants, Williams, used his mobile phone to record what was going on and that some of that footage would be shown to the jury.