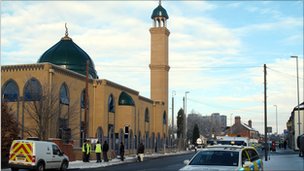 Four teenagers were arrested yesterday after an arson attack on a Staffordshire mosque – described by police as a racially-motivated crime. The fire began at a newly-built mosque in Hanley, Stoke-on-Trent, at 6.30am.

Police detained three men and a woman in their late teens. Firefighters were called after smoke was seen coming from the mosque. Police said they were investigating a link between the attack and damage to a nearby gas main. The mosque was not seriously damaged.

Chief inspector Wayne Jones said: “We are treating this as a racist attack on a religious building.” He added: “I am sure the community are as appalled as we are at this behaviour. I would appeal for anyone with information to come forward. Local neighbourhood police officers are meeting with members of the community to keep them informed and to address their concerns and obvious anger about this criminal incident.”

A police spokesman said that the four people who were in custody were to be questioned by detectives and police were reviewing CCTV footage from the area as well as making house-to-house inquiries.

Mohammed Pervez, leader of Stoke-on-Trent council, called the attack an “irresponsible and reckless” act. “This is a very serious incident,” he said. “City council officers are working closely with the police to assist them in their inquiries.” Pervez urged anyone with information about the incident to come forward as soon as possible.