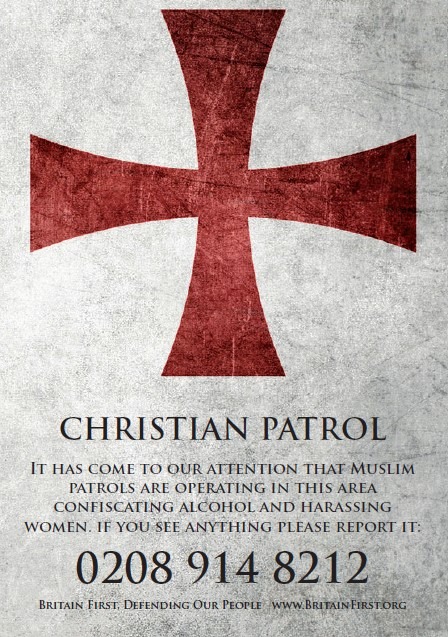 Britain First have been crowing over their latest idiotic stunt, namely the organisation of a so-called Christian Patrol in East London. (EDL News and Bartholomew’s Notes on Religion have the details.)

This involved handing out leaflets in Whitechapel on Friday evening asking passers-by to report any sightings of the so-called Muslim Patrols. In a video of the stunt, Britain First chairman Paul Golding explains that two of his members are openly smoking cigarettes and drinking cans of Stella near the East London Mosque in an attempt to “draw the Muslim Patrols out”. Given that these “patrols” involved no more than a handful of individuals and the ringleaders are now in prison, that was always going to be unlikely. The actions of Britain First amounted to nothing more than a crude provocation in an area with a large Muslim population.

Golding is currently on bail following an incident in which he and his friends harassed Anjem Choudary, and one of his bail conditions is that he should not enter the Greater London area, so you might like to ask the Metropolitan Police if they have any plans to arrest him.