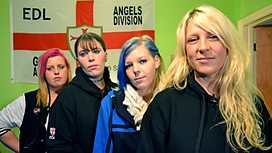 Last week BBC3 broadcast a documentary entitled “EDL Girls: Don’t Call Me Racist”, which followed a number of English Defence League “Angels” as they went about their lives whipping up hatred against the Muslim community. The subjects were treated sympathetically, and the violence and viciousness of the EDL were left unexamined, although it proved impossible to disguise their ignorance and bigotry. Over at the Tell Mama website, Aniqah Choudhary has a good article exposing the failings of the film.