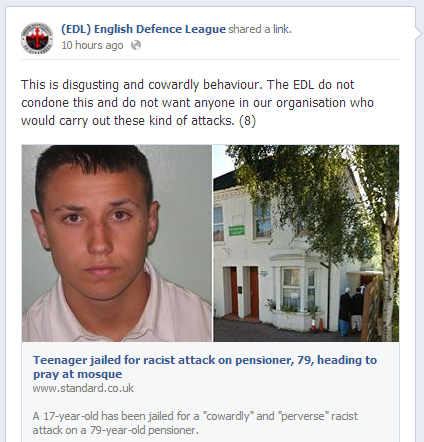 Anyone who has followed the English Defence League over the years will be aware of the disjuncture between the moderate-sounding statements that occasionally appear on the organisation’s website and the violent, hate-filled comments that EDL supporters post every day on its Facebook page. Yesterday the EDL made the mistake of publishing one of its “moderate” statements on Facebook.

The occasion was the conviction of teenage thug Fraser Giles who received an 8-year prison sentence for a horrific attack on an elderly Muslim in Uxbridge. The EDL posted a link to a press report of the case accompanied by a pious statement condemning Giles’ “disgusting and cowardly behaviour”. Perhaps the EDL reasoned that even its own supporters would balk at breaking the skull of a 79-year-old man and leaving him lying in a pool of blood.

If so, they were wrong. While some EDL supporters posted comments backing the condemnation of Giles’ actions, others took the opportunity to criticise what they evidently regarded as a piece of liberal handwringing. Here is a selection of their comments: