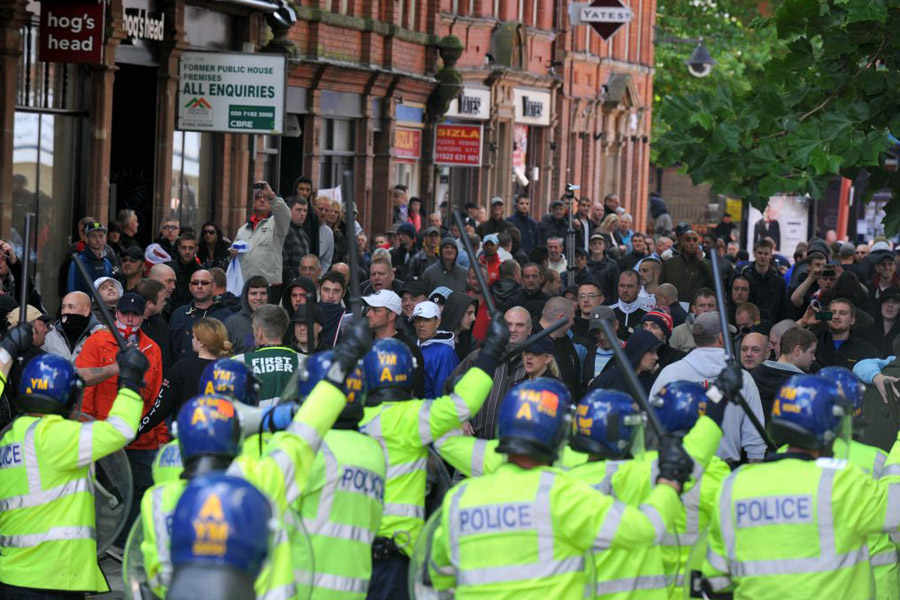 Eight men were jailed by a judge yesterday, while an 18-year-old who was a youth at the time was spared an immediate prison term.

It follows prison sentences on Monday for seven men who took part in the same protest. More thugs were being sentenced at Wolverhampton Crown Court today.

Yesterday, the court heard how Dean Lidster kicked out at a police dog. He was among others who broke up a wooden table outside the Wetherspoon’s pub in the town and picked up pieces of a ceramic pot. The 44-year-old of London hurled the pieces over the police line. He was put behind bars for 28 months.

Mark Conway spat at police officers and launched a fly kick. He initially denied his involvement but changed his plea ahead of trial. The 35-year-old, of no fixed address, was jailed for 30 months. Thomas Schofield, defending, said he had seen trying to pacify the situation.

“He has not been involved in a disorder of this kind before. There is genuine remorse from this defendant,” he said.

Christopher Jelley, of Broadway Close, Shrewsbury, who served in the Army, was seen trying to square up to a female officer. He had gestured using his finger across the throat. Judge Nicholas Webb gave him to 22 months.

Benjamin Banfield, 35, of Cobhorn Drive, Bristol, squared up to officers and was kicking out and spitting. He threw missiles and was shouting. Banfield was handed a 20-month term.

Samuel Phipps, 18, of Lingfield Drive, Great Wyrley, avoided an immediate 16 months detention as it was suspended for two years. He was ordered to do 200 hours unpaid work.

Judge Webb, accepting Phipps had been influenced towards the EDL by someone else, said: “You have been very, very lucky you have escaped custody by the skin of your teeth.”

They included Dean Smith, of Brunswick Park Road, Wednesbury, who was said to be at the ‘forefront’ of the action although he didn’t throw or chant anything. He received 27 months.