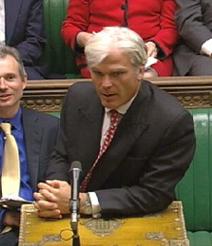 One of Hampshire’s top politicians has criticised the “crazy fools” insulting Muslims following the murder of Drummer Lee Rigby. New Forest West MP Desmond Swayne has condemned the current wave of anti-Muslim incidents, including attacks on mosques, which began shortly after the young soldier was killed in Woolwich.

Writing in his weekly blog Mr Swayne says: “I have regular correspondents on the subject of Islam. Some are Internet ‘trolls’ who send me e-mails filled with complete drivel that they have picked up from nasty right-wing websites…. Then there are a few ‘churchy’ folk who send me considered but equally misguided stuff peppered with quotes taken out of context from the Koran and enclosing articles from evangelical publications.”

Mr Swayne says the vast majority of Muslims live ordinary lives and are often the main victims of Islamist violence around the world.

He adds: “Any fool who insults a Muslim or attacks a mosque in the wake of the disgusting murder of Drummer Rigby is nothing but a bloody fool, and doing the very work of the terrorist. It is their desire and intent that our tolerant, easy-going, ‘live and let live’ way of life should be extinguished.”

Mr Swayne, 56, was formerly Parliamentary Private Secretary to the Prime Minister, David Cameron. In 2003 he served in Iraq as a major in the Territorial Army.

Not everyone is impressed: 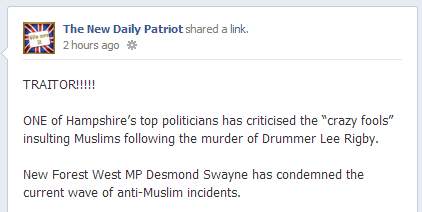