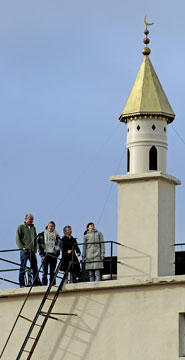 A Swiss shoe-shop owner has built a mock minaret on the top of his warehouse in defiance of a ban on the Muslim architecture.

Guillaume Morand extended a chimney, gave it the form of a minaret and sprayed it in gold paint to protest against a constitutional amendment approved in a nationwide referendum last month.

“It was scandalous that the Swiss voted for the ban,” said Mr Morand, 46, who owns the Pomp It Up chain of shoe stores. “Now we [the Swiss] have the support of all the far-right parties across Europe. This is shameful.”

The tower, made of plastic and wood above his warehouse near Lausanne, is a “message of peace and tolerance” designed to last for two years before it rots, he said – but there are no plans for it to be used to summon Muslims to prayer. “Our minaret is pretty,” he said. “You could say I’m proud of it and I’m happy that people are talking about it.”

His neighbours are less enthusiastic and have showered him with racist insults since the minaret appeared this week, he said. One telephoned a threat to demolish the structure.