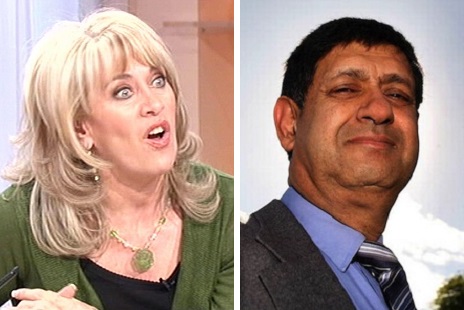 “Halal meat controversy is about unnecessary cruelty to animals and NOT Islamaphobia.” Well, that’s what Carole Malone claimed in her column in yesterday’s Sunday Mirror.

According to Malone, not previously known for her command of the finer points of Islamic theology, halal slaughter is not mandated by the Qur’an but is based on the Hadith – described by Malone as “teachings written 300 years after the Prophet died which are often used to justify hardline views”. Therefore, Malone asserts: “No Muslim is bound by his or her religion to eat halal meat.”

You might think this line of argument sounds familiar, and you would be right. Malone has lifted it straight from an article by the appalling Taj Hargey, published by the Daily Mail on its Right Minds blog last week.

You can understand why Islamophobes should be enthusiastic about Hargey’s article, which describes the sale of halal meat products by Subway and Pizza Express as “covert religious extremism and creeping Islamic fundamentalism making its way into Britain by the back door”. With a nod to the witch-hunt currently being conducted in Birmingham schools, Hargey concludes: “It is high time the white, liberal, Guardian-reading classes stopped behaving like apologists and woke up. There is a fundamentalist Trojan horse in our midst, and we must take corrective action.”

(This isn’t the first time that Malone has taken her cue from Hargey, by the way. A year ago she used him as a source for an article entitled “Oxford grooming ring was race-hate gang rape”, claiming that Hargey was the only Muslim with “the courage to stick his head above the parapet and say what happened to these girls WAS racially motivated and illustrates the deep-seated hatred some Muslim men have for white women”.)

In his Right Minds piece Hargey writes that the requirement for halal slaughter, with a prayer recited as the animal is killed, “does not come from the Koran itself – it derives from a secondary and often suspect source, called the Hadith”. Why, then, do the vast majority of observant Muslims follow this practice? Hargey explains:

“One reason is that religious zealots and theological ideologues are deliberately promoting confusion about halal to sow discord and resentment. Three of the main fundamentalist Muslim sects – the Wahhabi fanatics in Saudi Arabia, the Salafi extremists of the Muslim Brotherhood in Egypt, and the Deobandi zealots from India-Pakistan – are foisting their fabricated notions about it down our collective throats…. Antiquated customs like the insistence exclusively on the Hadith version of halal meat only serve to entrench that fundamentalism. They should be rooted out and consigned to the dustbin of history.”

As Matthew Smith observes, Hargey’s attribution of responsibility for the practice of halal slaughter to Wahhabis, Salafis, Deobandis and the Muslim Brotherhood is “utter nonsense, because mainstream Islamic scholars who do not belong to any of these sects insist that meat be slaughtered with the prayer”. Nor is respect for the Hadith as a source of inspiration complementing the Qur’an restricted to these organisations. Again, this is a mainstream view within Islam – including, as Matthew Smith has pointed out elsewhere, among “the Bareilawis and the other Sufi-based groups”. Hargey’s cranky position on the Hadith is adopted by a minuscule minority of Muslims.

As for Malone, I can’t recall her ever using her Sunday Mirror column to alert her readers to the well-documented mistreatment of animals in non-halal abattoirs. Though, to be fair, this isn’t the first time that she has expressed herself on the issue of animal cruelty. In 2004, when the then Labour government introduced legislation to ban foxes being torn into bloody pieces by packs of hounds, Malone wrote: “I couldn’t give a monkey’s about foxes, not least because our towns and cities are now over-run with the scavenging germ bags.”