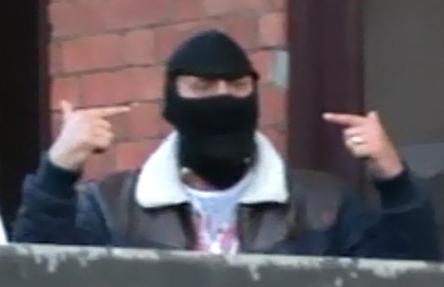 A rioter told police he wore a balaclava to imitate someone in a burkha during the trouble that broke out during a march in memory of murdered soldier Lee Rigby.

Craig Oakley, 41, joined a march the judge described as little more than a “pub crawl” for men aged between 18 and 35 – some of whom were members of the English Defence League. The march was organised in Kingswood via social-networking website Facebook following the death of Drummer Rigby in Woolwich, London on May 22.

What started as a relatively peaceful event, with some 20 to 30 people involved, became fractious and resulted in police ‘kettling’ the group, that by then had swollen to around 60 people, in St George’s Hall pub in Redfield. During that time Oakley, a security guard, was filmed by police chanting, helping build the barricade of tables and chairs in the pub and kicking out at an police officer.

The married father-of-two of Nover’s Lane, Knowle was arrested and later admitted affray. At Bristol Crown Court he was given a five-month prison sentence suspended for 12 months with 100 hours unpaid work and must pay a £80 victim surcharge.