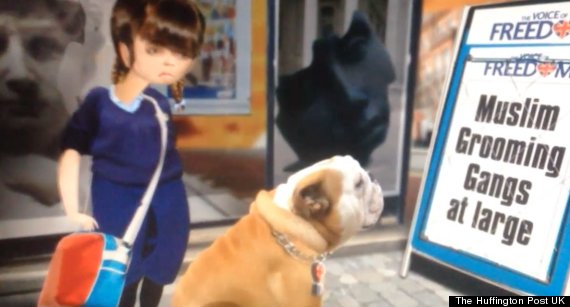 Vile cartoons of Muslims swilling alcopops and chasing pre-pubescent girls, as well as graphic depictions of Lee Rigby’s murderer, could be broadcast on the BBC and ITV this week, submitted as the BNP’s official party election broadcast.

The party can submit a five-minute broadcast to major channels ahead of the May European elections.

An 10-second clip, leaked to The Huffington Post UK, shows an animation of a girl and the BNP’s bulldog mascot looking at a billboard which says ‘Muslim Grooming Gangs At Large’. She is then confronted with a gang of Muslims in traditional dress, swigging blue WKDs, as a background song to the tune of ‘All Things Bright And Beautiful’ mentions how “there’s some who prey on little girls from takeaways and taxis”.

The girl walks past a burqa-wearing Big Issue seller with a small boy, with a sign saying ‘Sale’ around his neck. She encounters a black silhouette, with blood red hands, a clear reference to Woolwich soldier Lee Rigby’s murderer Michael Adebolajo, as the song references those who “kill with knives and axes”.

The BNP has party election broadcasts scheduled ahead of May’s European Parliament elections. The five-minute broadcast will go out on prime-time BBC and ITV on Tuesday.

Simon Darby, the BNP’s press officer, said the description of the clip matched that the party had submitted to broadcasters, though he said he was angry the video had been leaked ahead of time. “I haven’t had any indication it isn’t going to be broadcast, as is,” he said. “It’s going to get an enormous audience, at peak time. Usually they try and put it in the middle of the night.”

Nick Lowles, of anti-fascist group Hope Not Hate, told HuffPost UK he would be astonished if the clip were broadcast in its current form. “It is inconceivable this could be broadcast, especially since the BBC have rejected less extreme broadcasts in the past,” he said.

I have to agree with Nick Lowles here. British TV doesn’t exactly have an unblemished record when it comes to promoting Islamophobia, but based on the HuffPo’s description of the BNP’s proposed broadcast it is difficult to believe it will be accepted in this form. Or indeed that the BNP leadership ever imagined it would be. Their purpose presumably is to attract publicity by getting the broadcast censored and then scream about the establishment capitulating to Muslim demands for the suppression of free speech. While this will feed into the prevailing atmosphere of anti-Muslim hysteria, the BNP still won’t get any of their candidates elected.