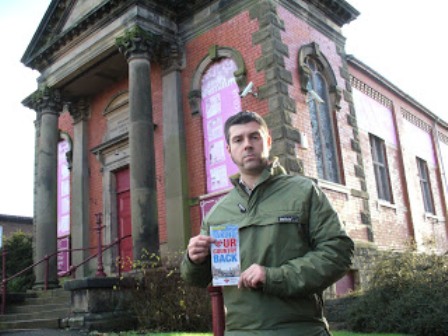 British National Party officials have made an official complaint after plans to transform a former Presbyterian church in a town in Shropshire into a Muslim centre were given the go-ahead.

The north Shropshire branch of the far-right party said the decision made by Shropshire Council planning officers should have been made at a full public meeting rather than in private. And they have written to Shirehall in protest over how the issue has been handled.

Phil Reddall, organiser of North Shropshire BNP, said he had made a complaint to Shropshire Council due to the decision being delegated to the planning department.

The 19th century building in Oswald Road, will provide a permanent home to Oswestry Muslim Society for the first time in its 10-year history. George Miah, chief adviser of the society, has previously said the organisation hopes to build bridges and gain better understanding in the community through the facility.

The £300,000 project will see the building, currently a furniture store, converted back into a place for meeting and worship. Work will include internal alterations and the creation of a one-bedroom, residential unit.

Mr Reddall said: “Maladministration has been cited as I believe, given the comments received from the public and the culturally significant nature of the application, the council had a moral duty to make a decision as an elected body, thus being fully accountable to the electorate.”

Mr Reddall said he was awaiting a council reply before deciding his next move.

In an accompanying editorial the Star comments:

Having failed to mobilise mass opposition to the plans despite an aggressive publicity campaign, it is now trying to play the political guilt card. The far-right organisation’s latest grumble is that the decision should have been taken at an open, transparent, public debate rather than by planning officials behind closed doors.

More than 70 people wrote to Shropshire Council to object to plans by the local Muslim Society to develop a 19th century former Presbyterian church in Oswestry, while around 40 penned their support.

This is hardly a case of the local authority trying to steamroller through a planning decision against an enormous groundswell of public outrage – despite the BNP’s best efforts in canvassing opposition by delivering provocative leaflets through the letterboxes of some 2,000 nearby homes.

The BNP’s view is that the council showed political cowardice over a ‘culturally significant’ planning application for the building, most recently used as a furniture warehouse. The only real cowardice here is the BNP’s refusal to acknowledge that it does not have the public on its side.

Officials cite the planning decision as another example of the political establishment going out of its way to appease the Muslim community, while disenfranchising other sections of the population at the same time.

Would the party have been making such an incessant song and dance if the plans had involved turning the building into a church where other religious groups, like Methodists or Catholics would worship?

If the BNP wants to bring the discussion round to electoral accountability, they would do well to also remember that they do not have a single councillor in Shropshire, and are not likely to see that position change in the near future.