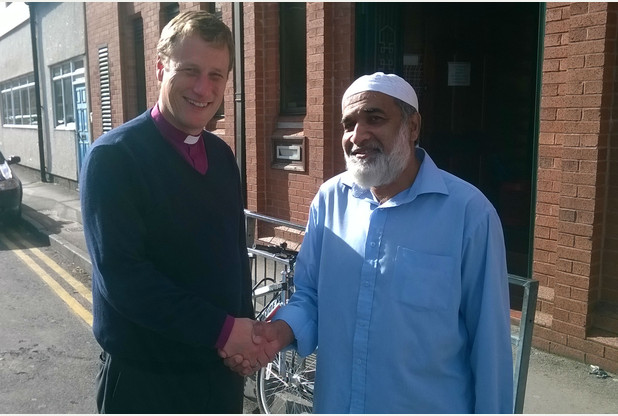 Faiths and cultures came together at Barton’s Jama Al-Karim Mosque today during an educational visit by the Bishop of Tewkesbury.

Rt. Revd. Martyn Snow was joined by a group of Christians from Gloucester for a guided tour of the mosque in All Saints Road and to hear educational talks.

Visitors learned how Muslims pray, about the teachings of Islam and what the mosque has done for the Gloucester community over the years. The purpose of the visit was to educate the community about the Islamic faith, to meet neighbours and to foster a greater religious and cultural understanding between different groups.

Rt. Revd. Snow, who is currently the acting Bishop of Gloucester, said: “This visit was held to try to learn from each other and show that Christians and Muslims can live in peace. It’s all about growing an understanding of each other’s faiths so we are more able to live together and work together. We hoped to bring as many people along as possible to learn as much as we can about a different culture.”

Said Hansdot, city councillor for Barton and Tredworth who attended the event today, said: “Education about other’s cultures is very important if we all want to live in harmony. Events like this help because not everyone visiting here today has been to a mosque before. Hopefully it will be an eye-opener for them.”

There was also a chance for the visitors to ask questions to mosque volunteer and tour guide Abdullah Patel, and to clarify common misconceptions about the Islamic tradition such as whether Muslims can drink water during Ramadan. The tour also discussed the origins of the Mosque, which was built in 1986, and a student recited a passage from The Quran, Islam’s central religious text.

The visit had been on the cards for six months and involved the nearby St James Church. Vicar of St James Church Tom Wilson said: “We thought it would be good to invite people from the church to help them find out about the mosque and bring the community together. Our church has been here before but it’s good to reaffirm this.”